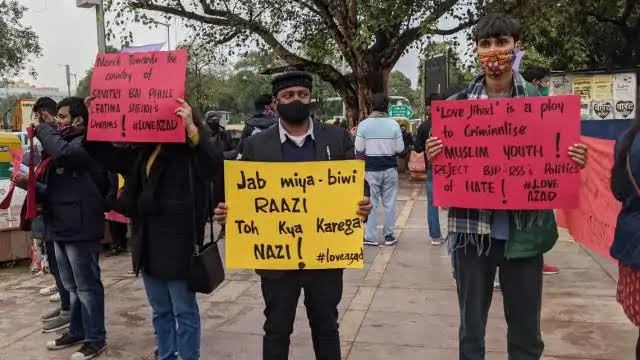 New Delhi:  Rights group, the  National Confederation of Human Rights Organizations participated in the protest held at Connaught Place on Sunday  against the hateful law of “love-jihad” that has been brought in four states in India, namely Uttar Pradesh, Madhya Pradesh, Haryana, and Karnataka.

The protest was joined by several organizations including All India Students’ Association. The people held placards asserting their right to love and rejecting the State’s narrative of “love-jihad” that maligns Muslims and denies women their agency. The law is entirely baseless as no such case of “love-jihad” has been found. However, the politics of the central government has brought in the law and many innocent people have been falsely incarcerated and illegally detained on trumped up charges. These incarcerations and detentions are being justified in the name of the new “love-jihad” law. As a result, the already marginalized Muslims in states like the Uttar Pradesh have been beaten up and harassed by both the State personnel as well as the saffron brigade.

In the name of preventing “forceful conversions” to other religions, the law requires interfaith couples to submit an affidavit to the Magistrate two months in advance regarding conversion, which is double the time period laid down in the 1954 Special Marriage Act. Following the submission of the affidavit, the Magistrate will check the “real intentions” behind conversion. The verification process that the law mandates for conversion.

The NCHRO stands in firm solidarity with the campaign of Love-Azaad, and condemns the hateful politics of the BJP that aimed at maligning Muslims and denying women their agency.