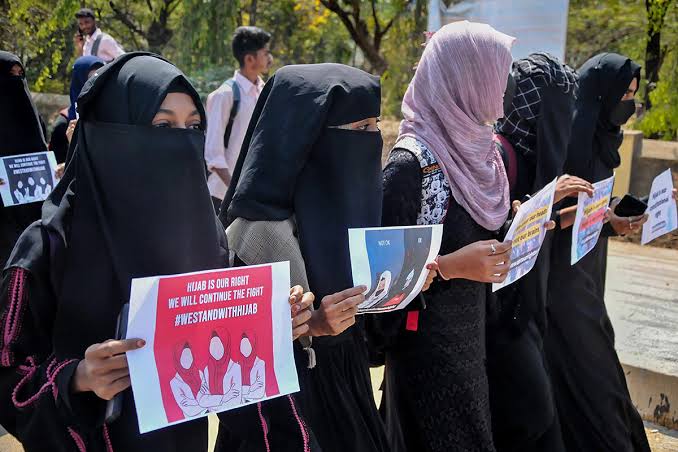 Dakshina Kannada : Hundreds of women took out a massive rally in Mangaluru city of Dakshina Kannada district in support of wearing hijab in educational institutions under the banner of the Campus Front of India (CFI) on Saturday.

The agitators raised slogans “Inquilab Zindabad” and “Hijab is our right”. The agitators ridiculed BJP MLA Raghupathy Bhat for speaking against the hijab through a skit.

The six students of Udupi Girls’ Pre-University College, who started the protest demanding their right to wear hijab in Karnataka, led the protest.

CFI State Committee Member Fathima Usman stated that Muslim girl students are being persecuted through restrictions on hijab. The protest is being organised to oppose the implementation of RSS ideology on students.

“We are children of Tipu Sultan and followers of Dr B.R. Ambedkar,” she claimed.

The Supreme Court of India is likely to take up the issue of hijab in the coming week. The petitioners have made an appeal against the order of the Karnataka High Court Special Bench, which dismissed the petitions seeking its order to wear hijab in classrooms.

The Special Bench also stated that wearing of hijab is not an essential practice of Islam. The Karnataka government has banned any religious symbols in the classrooms and given the discretion to college administrations to frame the rules.— IANS