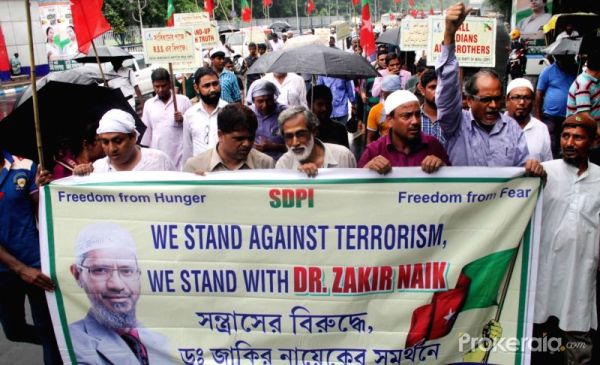 Kolkata, July 15 : Alleging a political conspiracy behind it, the Social Democratic Party of India (SDPI) on Friday took out a protest rally in the city against the “persecution” of controversial televangelist Zakir Naik.

“We condemn each and every act of terror and support the fight against it. But in the name of countering terrorism, the way Naik is being persecuted is completely unacceptable and reeks of a political conspiracy,” said SDPI state general secretary Asfar Ali.

“The agencies are investigating and if anything is found against him, he should be strongly dealt with. But so far nothing has been found. In fact the Maharashtra State Intelligence Department has already given him a clean chit.

“Despite that, Naik is being painted as a patron of terror. This is being done by the saffron forces – the BJP and the RSS – to create communal tensions,” alleged Ali.

Shouting slogans of solidarity with Naik, a thousand-odd SDPI activists took out the rally in city’s Park Circus area and later submitted a memorandum to the state Home Secretary.

Naik, 50, is at the centre of a storm for allegedly inflammatory speeches.

His Peace TV and Peace mobile have been banned in Bangladesh following revelations that two of the young Islamist attackers who killed 20 hostages, mostly foreigners, during a Dhaka cafe siege on July 1 drew “inspiration” from his speeches.—IANS