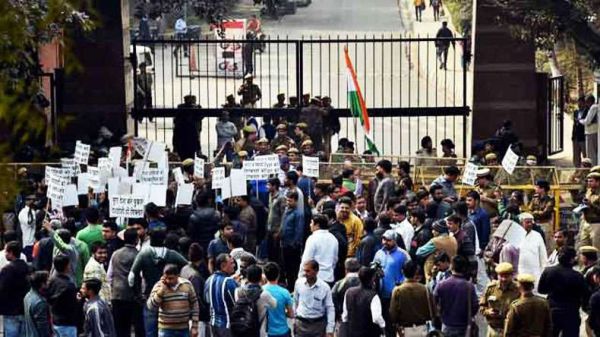 New Delhi, Feb 16 : Scores of people on Tuesday protested outside the Jawaharlal Nehru University (JNU) here to demand the arrest of those who shouted anti-India slogans at an event on the campus last week.

The protestors – said to belong to the Vishwa Hindu Parishad and Bajrang Dal – also demanded the shutdown of what they said was “anti-national” administration of the varsity.

Carrying saffron flags and shouting slogans like ‘JNU prashasan bandh karo (Shut down JNU administration)’, the protestors said those who raised anti-India slogans at an event organised on February 9 to commemorate the hanging of Parliament attack convict Afzal Guru should be arrested.

“Arrest those ant-national elements,” shouted one of the protestors as he tried to break through a barricade at the university entrance.

“Our protest is in favour of the nation,” he added.

The demonstration follows a series of protests held by JNU students against the arrest of their students union president Kanhaiya Kumar, booked on sedition charge for allegedly raising anti-India and pro-Afzal Guru slogans on the campus.—IANS