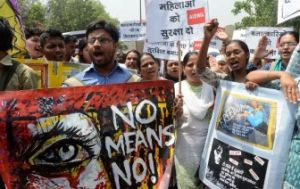 New Delhi, April 20 : Street protests erupted in the national capital Saturday against the barbaric rape of a five-year-old girl who doctors said would need major reconstructive surgery as her private parts had been badly damaged, even as police nabbed the accused from his in-law’s house in Bihar in an early morning raid.

Public anger spilled onto the streets as hundreds of protesters held demonstrations in many parts of Delhi, being increasingly described as the “rape capital” of India, demanding death for Manoj Kumar, 22, who kidnapped, starved and brutally tortured the girl for two days in a working class locality in east Delhi.

The accused was arrested from Muzaffarpur in Bihar.

Students, women activists and members of the Aam Admi Party (AAP) and Akhil Bharatiya Vidyarthi Parishad (ABVP), the student’s wing of the Rashtriya Swayamsevak Sangh, laid siege outside the Police Headquarters at ITO in the heart of the capital from early morning, shouting slogans and waving banners.

Their numbers swelled by afternoon. The crowd demanded the resignation of Police Commissioner Neeraj Kumar to take moral responsibility for police callousness. Many protesters tried to break the barricades and enter the Police Headquarters.

They were gently, but firmly pushed back by police, maybe taking a lesson from Friday’s incident when a senior police officer was suspended for slapping a protesting schoolgirl – an incident that attracted wide condemnation.

The restive crowd soon moved to AIIMS where the girl is undergoing treatment.

Soon another batch of protesters moved to union Home Minister Sushilkumar Shinde’s house in Krishna Menon Marg in central Delhi and raised slogans against the deteriorating law and order situation in the capital, which has seen 393 rape cases in just three months as compared to 152 in the same period last year.

Gandhi condemned the rape, saying “action and not words are required to check incidents like this heinous rape.”

“They reflect a mental sickness which has crept in society…a strong law is not sufficient, they need a shock treatment… They should be hanged to send a strong message to other people,” she told reporters.

President Pranab Mukherjee also expressed deep shock and anguish and said “urgent steps must be taken to bring the perpetrators to immediate justice”.

“As a society, we must introspect at the erosion of values and our repeated failure to ensure the security of our women and children.”

Doctors at the All India Institute of Medical Sciences (AIIMS) said the girl’s condition had stabilised and she was talking.

“She has suffered injuries to her private parts and will need to undergo corrective and reconstruction surgery,” AIIMS medical superintendent D.K. Sharma told reporters.

“Her condition is stable and she is out of danger. She has been put on intravenous fluids and antibiotics,” he added.

“She has been conscious, alert and all her parameters are normal. She is talking,” he said.

The girl was shifted to AIIMS Friday from an east Delhi hospital where doctors had said they had never seen such a brutal attack after they removed a bottle and pieces of candle from her private parts.

The girl was abducted April 15 and kept hostage for two days without food and water in a room in which the attacker lived, on the ground floor of a building in east Delhi’s Gandhi Nagar. The victim’s family stays in the same building, police said.

The girl, who was repeatedly raped, was rescued when members of her family heard her screams Wednesday, police said.

The accused had locked the door from outside and fled, thinking that she had died.

“She was locked in the room for over 40 hours,” said Delhi’s Deputy Commissioner of Police (DCP) Prabhakar.

Manoj Kumar is to be brought to Delhi later Saturday.

He was arrested from his in-laws house in Bharthua village in Bihar’s Muzaffarpur district late Friday by a team of Delhi Police and Bihar Police, said Prabhakar.—IANS.