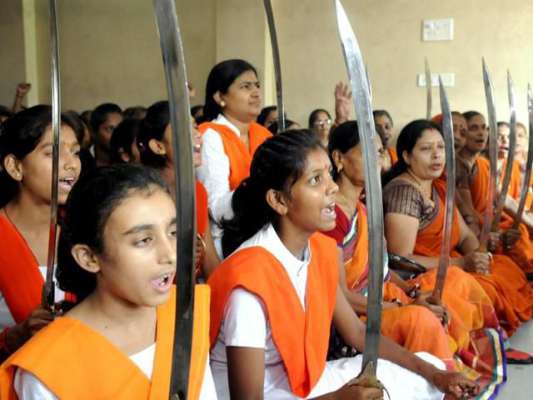 Pune, June 3: Police in Pune have booked some activists of the Vishwa Hindu Parishad (VHP) for taking out a procession in which girls were seen firing air guns and brandishing swords, an official said on Monday.

The procession was taken out from Ankush Chowk to Thackeray Maidan in Nigdi area on the outskirts of the city from 5 p.m. till 10 p.m. on Sunday.

According to the FIR, Dudhe said that in the procession, at least four girls were illegally carrying air guns and another five had swords.

Dudhe said that in order to maintain law and order, the Pimpri-Chinchwada Police had banned all types of dangerous weapons from May 21-June 3 and the VHP procession had flouted the police orders.

No arrests have been made in the case so far.

This incident coincides with a row erupting in a private school in Thane, run by a Bharatiya Janata Party legislator, in which students were allegedly imparted training in weapons handling.

While the police have claimed that the weapons were models, activists have contended that attempts were being made to dilute the case as it involved an influential ruling party legislator from Mira Road town, Narendra Mehta.

Between May 25 and June 1, the Bajrang Dal had organised a weapons training camp in the Seven Square Academy, a CBSE-affiliated school, and the matter came to light after a student Prashant Gupta posted some pictures of the camp activity.

In a memorandum submitted to the Assistant Superintendent of Police Atul Kulkarni last week, the Democratic Youth Federation of India demanded a thorough probe into the incident, seizure of the arms and their forensic analysis and the booking of Mehta and others.