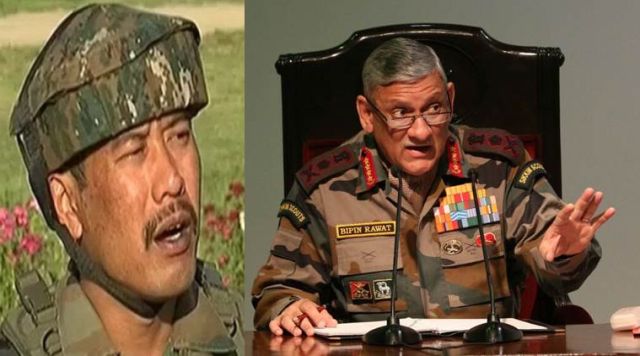 Jammu: Army chief General Bipin Rawat has said that exemplary punishment would be given to Major Gogoi if he was found guilty of any offence. The development comes after Major flaunting rules had arrived at a Srinagar hotel in old city with a young woman which had led to altercation between him and the local staff.

“If anyone in Indian Army, at any rank, does any wrong and it comes to our notice then strictest action will be taken. If Major Gogoi has done something wrong then I can say that he will be given due punishment and it will be such that it will set an example,” Rawat said.

The Indian Army also ordered a court of inquiry against Major Gogoi following a scuffle with hotel staff in Srinagar. “Army has ordered a Court of Inquiry and appropriate action will be taken after the inquiry is finalised,” a statement issued by the Army said.

Major Gogoi on Wednesday had arrived at a Srinagar hotel with a young woman and a man named Sameer Ahmed. The staff refused to let the woman inside, claiming she was a resident of the area, over which an altercation erupted. The police arrived and questioned all three at a police station. They were later allowed to leave and Gogoi was handed over to his unit.

It is pertinent to mention Major Gogoi had earlier sparked a huge controversy by tying a Kashmiri man to a jeep bonnet during protests that had erupted during by-polls for vacant Lok Sabha seats. Later, it was confirmed by the police that the man was not a protester but a voter.

Jammu and Kashmir Police has also ordered a probe into the incident and appointed SP North City Sajad Ahmad Shah as the inquiry officer.