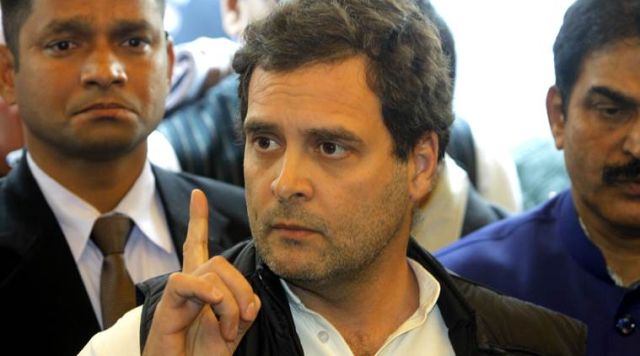 New Delhi : Congress President Rahul Gandhi on Wednesday said that 12 people were murdered in Thoothukudi in Tamil Nadu because they refused to bow to the philosophy of Rashtriya Swayamsevak Sangh (RSS).

The Bharatiya Janata Party (BJP) hit back at Gandhi, saying he was trying to derive political mileage out of a sad situation.

“Tamils have been murdered because they have refused to bow to the philosophy of RSS. The bullets of RSS and Modi can never suppress the feelings of Tamil people. Tamil brothers and sisters, we are with you,” Rahul Gandhi said in a tweet written in Tamil.

Twelve persons have died and several more injured over the last two days during an anti-Sterlite protest in Thoothukudi.

Hitting out at Gandhi, BJP Spokesperson Sambit Patra raised questions on his “common sense” and said that such attempt of the Congress President was his best excuse to hide his own failures.

“Rahul Gandhi is milking a situation which is sad. Rahul Gandhi is trying to derive some political mileage out of it. He names RSS as the one which is perpetrator of the death of 12 people. Mr. Gandhi, are you aware of the fact that in a federal structure law and order is a state subject,” Patra asked addressing a press conference here hours after Gandhi’s tweet.

He said with heavy heart the BJP would gift him Class XI civics book, so that Gandhi could learn the basics of democracy and Constitution.

“In every issue you drag RSS. Was it RSS behind Emergency or behind 1984 anti-Sikh riots? Was the RSS behind Bofors or Quattrocchi? Tomorrow you will say that RSS was behind making you Congress chief,” he said.

Describing Rahul Gandhi as “the cause” of the loss of Congress, he said that state after state the Congress had been losing elections right from the day he was appointed Vice President of the party.

“This feat of defeat is continuing even after his appointment as Congress President,” he said.

“Knowing very well that he is not able to give able leadership to Congress in any situation, he feels that he can milk politics that suits his political opportunism. He feels that RSS and BJP should be drawn into the battlefield. In a way, he tries to hide behind the veil of RSS because he sees that this is the best excuse to hide his own failures,” Patra said.

Asking the Congress leader whether he wanted to send out a message based on lies, he said: “Such behaviour does not behove you. We expect some amount of maturity.”