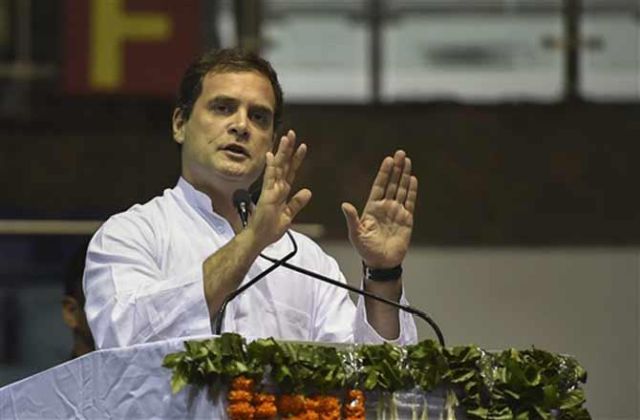 Panaji : Congress President Rahul Gandhi on Saturday slammed the BJP for what he described as an orchestrated attack on his party workers at a demonstration organised here by the state BJP to protest against his allegations of irregularities in the Rafale fighter jet deal.

In his message shared on Facebook, Gandhi also said that he was proud of the “spirit of Gandhigiri” displayed by Congress’ state women’s chief Pratima Coutinho, who was allegedly attacked by Bharatiya Janata Party (BJP) supporters during the clash on Thursday afternoon.

“Democracy frustrates the BJP. This designed, deliberated and organised attack on Congress workers in Goa is an exemplification of that feeling. The attempt is to instil fear,” Gandhi said on the social media site.

“The cowards who came to attack us in Goa, and their bosses sitting here in Delhi, should know, fear is alien to the workers of the Congress party,” Gandhi said, adding that Prime Minister Narendra Modi should “read about the fate of those rulers who chose to attack non-violent Congress workers in this country”.

Meanwhile, the state Congress legislative party and the Pradesh Congress Committee on Saturday met to condemn Friday’s attack on the party’s workers.

“It was a completely state-sponsored mob which included members of the Chief Minister’s Office, Speaker’s Office, MLAs, Ministers, top BJP functionaries including the state president and was supported by the police machinery,” state Congress President Girish Chodankar said.

Both the Congress as well as the BJP leaders have filed First Information Reports against each other following the clash, with each accusing the other of rioting, assault, and outraging the modesty of women.