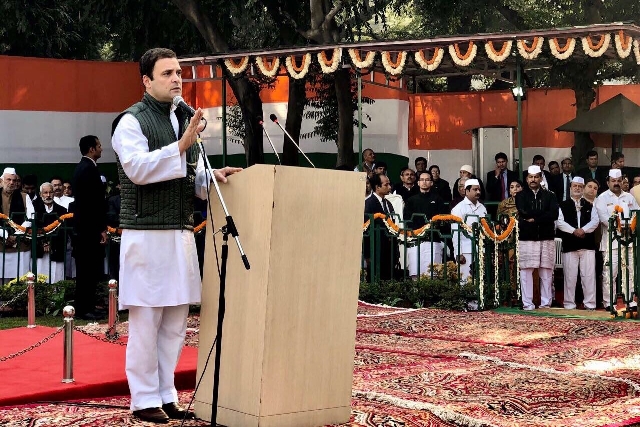 New Delhi: As the Indian National Congress turns 133 years old on Thursday, newly-elected party president Rahul Gandhi launched an incisively sharp attack on the Prime Minister Narendra Modi and his government, saying the “Constitution and the foundation of the country are under a threat”.

Addressing the Congress Foundation Day celebrations at the party headquarters here, Gandhi said, “attacks are being directly and surreptitiously made by senior members of the BJP”.

“Statements are being made by senior members of the Bharatiya Janata Party and it (the Constitution) is under attack surreptitiously,” he said

It was an apparent reference to Minister of State Anant Kumar Hegde who attacked “secularists” and said the government was there to “change the constitution”.

Gandhi urged party leaders and workers to be vigilant about these attempts.

“The moment when India got her Constitution was the most important moment in our history”, he also said, adding that the document, the foundation of India given to the country by Dr. Ambedkar, was under attack.

In a clear reference to the Prime Minister and BJP leaders statements in the recently concluded Gujarat elections and political environment in the country, Gandhi also said the ruling party has been using “web of deceits” for political benefits.

“What is happening today in our country is a web of deceit. The BJP operates on the basic idea that a lie can be used for the political benefit and this is the difference between us and them. We might suffer, we might not do well, we might be able to lose but we will defend the truth and that is the difference between the Congress Party and them.”

The new leader also recalled the “glorious” history of the party saying it has been working in the interest of this country for over a century.

“And there were many achievements that the Congress Party has achieved with the help and support of   our countrymen.”

Congress’ main pillar is “truth” and it will fight for irrespective of political consideration, he added.

Former Prime Minister Dr. Manmohan Singh, senior Congress leaders, workers, Congress Seva Dal activists, and children participated in the function.  While former Party president Sonia Gandhi was not present at the event as she was holidaying a Goa.