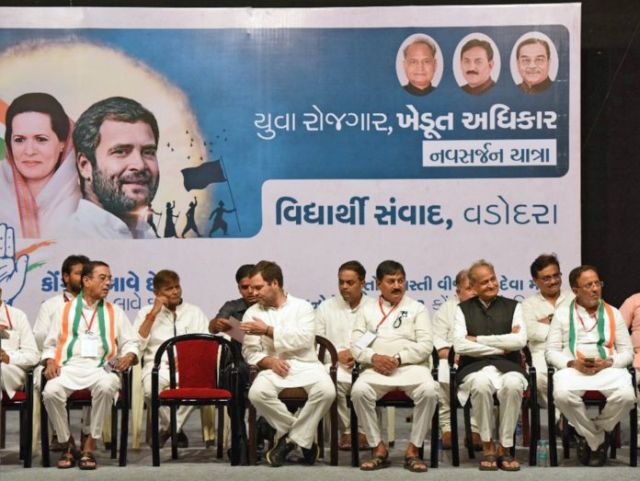 Vadodara : Congress Vice President Rahul Gandhi on Tuesday stepped up his attack on Prime Minister Narendra Modi, accusing him of remaining silent on the controversy surrounding the tremendous increase in the turnover of a company owned by BJP chief Amit Shah’s son.

There has been an amazing transition from ‘beti bachao, beti padhao’ to ‘beta bachao’, he jibed at the government over its slogan of saving and educating the girl child.

The Congress leader referred to a news portal report on the 16,000-fold increase in the turnover of the company owned by Amit Shah’s son Jay Shah before the firm was shut ahead of the November 8 demonetisation last year.

Gandhi also sought to link the issue with the Modi government’s initiatives.

“Modi ji announced ‘Make in India’ and ‘Startup India’ in 2014. I do not know what came in the mind of Shah ji and how it came. It was a big innovative idea and he did his work. In three-four months, the (turnover of) Rs 50,000 became Rs 80 crore. He got unsecured loan. And a very interesting thing happened. This highly successful company was closed by (Jay) Shah ji in 2016. How the chowkidar (gatekeeper) of India is quiet. He is not speaking a word,” Rahul Gandhi said.

Gandhi, who interacted with the youth here, addressed a series of meetings as part of his campaign for the coming Gujarat assembly polls, and said the central problem of the country was unemployment.

“Prime Minister Narendra Modi came up with a slogan of “Beti bachao, beti padhao (save girl child, educate her). But here, what is happening is save the son of Amit Shah,” he said.

Rahul Gandhi also took potshots at Modi in a tweet. “Amazing transition from Beti bachao to beta bachao,” he said.

The Congress leader continued in the same vein in many of his speeches during the day and raked up the issue of Jay Shah’s business.

“There was talk of ‘Make in India’ and startups. Startup is not visible but there is an icon of all startups. It was about an eight-year-old small company with Rs 50,000 turnover. But after (BJP) coming to power in 2014, it became Rs 80 crore company. What happened that a profitable company was closed? The chowkidar should reply.”

“Is he (Modi) a ‘chowkidar’ (watchman) or ‘bhagidar’ (participant)?” Rahul Gandhi said at a meeting in the home state of both Modi and Amit Shah.

The Congress Vice President slammed the Modi government over demonetisation and the manner in which the Goods and Services Tax was rolled out on July 1.

“You hit the farmers of Gujarat, you hit small traders, medium businessmen, and from this fire one company rises and that company is of Amit Shah’s son. This is a sign of Modiji’s Startup India,” Gandhi said amid applause from the audience.

Gandhi said that the earlier Congress-led United Progressive Alliance government’s record in generating employment was far better than that of the Modi government.

The Congress leader said there should be single-minded focus on job creation. “If our government comes to power, we will do this,” he said.

“We will bring policies after understanding your needs. We will listen to you and not impose our ‘mann ki baat’,” Rahul Gandhi said. ‘Mann ki Baat’ is Modi’s monthly address to the people through All India Radio.

Rahul Gandhi also said that people should be allowed to express themselves and even unpleasant criticism should be tolerated. “I do not believe in suppressing anyone,” he said.