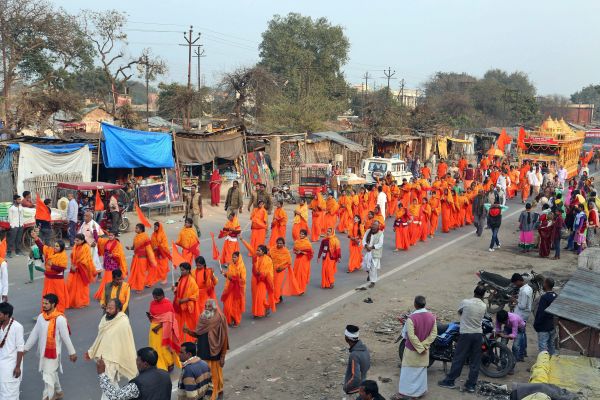 New Delhi:  The CPI (M) on Wednesday urged the Central and state governments to strengthen the law and order apparatus, expressing fear of communal polarization in the wake of  controversial  “Ram Raj Rath Yatra” set off Tuesday in Ayodhya.

The controversial Yatra, flagged off by RSS-affiliated VHP General Secretary in the presence of several Hindu extremist leaders including Faizabad BJP parliamentarian, will proceed through six states including poll-bound Madhya Pradesh and Karnataka and Kerala – the states where BJP has been struggling to strengthen its base.

According to sources, the saffron procession will spend a fortnight in Karnataka, then crossing via Kerala it will reach Rameswaram in Tamil Nadu.

The party alleged that the Yatra has an incendiary potential to escalate communal polarization in order to strengthen its communal Hindutva vote bank for the RSS-BJP. There are grave implications of possibilities for stoking communal tensions, violence and mayhem, said the party.

The party also calls upon all secular and peace-loving forces to expose the sinister designs of communal mobilization by the RSS/BJP.

The Yatra is supposedly to retrace the “route of Rama” to Sri Lanka, as described in Ramayana.  It has declared that the main agenda is to administer a pledge to the people for the construction of Ram temple at the very place of Babri Masjid in Ayodhya, re-establish `Ram Rajya’, inclusion of teaching of Ramayana in school syllabus and replace Sunday by Thursday as the weekly holiday to observe ‘National Hindu Day’.