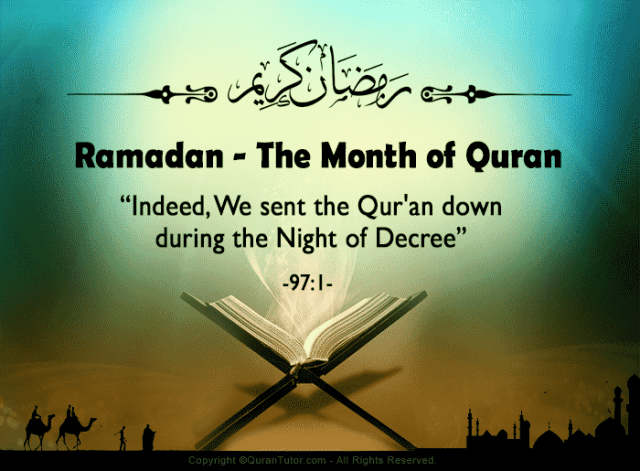 It is our privilege and we should thanks to Allah that we are alive in this Holy month of Ramadan. Those people are blessed who have found the Month of Ramdhan and observed the fast as per the teachings of the Islam. The month of Ramdhan is the Month of Quran as it is the month in which the Quran was revelled as Allah says as: “The month of Ramadhan [is that] in which was revealed the Qur’an, a guidance for the people and clear proofs of guidance and criterion. So whoever sights [the new moon of] the month, let him fast it; and whoever is ill or on a journey – then an equal number of other days. Allah intends for you ease and does not intend for you hardship and [wants] for you to complete the period and to glorify Allah for that [to] which He has guided you, and perhaps you will be grateful.”

The persons who were once the shepherds and their land was not known to the word it was because of this Quran who raised their status and the Arabian peninsula becomes famous in the world. It was because of this Quran the Arabs who were once shepherds became the kings and ruled the big states of the world. The Quran is the book that rejected the dogma created by the Arabs during the era of ignorance it is the book which emphasis on the clear signs and provided the new sustainable vision to the world. The central themes of the Holy book are the enlightenment, closeness to Allah, peace, and spirituality. The Quran uses several terms like “Tadabbur and “Tafakkur’ which indicates learning the lesions through reflection, thinking, and contemplation on the signs of Allah scattered across the world.

Every book has its objective, and the Quran aims to make man aware of the creation plan of Allah. That is to tell a man why Allah created this world, and what purpose is of the setting a man on the Earth, what is required from man in his pre-death lifespan, and what he is going to confront after the death. Therefore, the purpose of the Quran is to make a man aware of this reality thus serving to guide man on his entire journey through life into the afterlife.

Dr. Israr writes: “The Central Theme that runs throughout the Qur’an is the exposition of the reality and the invitation to the right way. It declares that the same truth was revealed to Adam (Peace be upon him), and all the Messengers after him, and they all preached the same right way. Thus, the real object for the Book is to call people to this “right way” and to illuminate Allah’s true guidance, which has often been lost either through man’s negligence and through heedlessness or distorted by his wicked perversity” (Dr. Israr Biynul Quran).

Many people have written famous books since from the Greeks, but the taste of these volumes diminish with the passage of time. However, Quran is the only book on the earth, which every day looks, new and fresh, for the readers, which of course are one of the sign that it is the Allah, word no other book in the world has such type of characteristic. It is the book, which answers every question, but it needs the eyes, as Allah says in the Quran why you are not pondering on this book, in other places Allah says the signs of Allah mentioned in this book is enough for the people who are sensible. Therefore, Allah gives us clues that if you read this book with the understanding it will help you in every matter of life and you will achieve success in this word as well as hereafter. However, what is happening today that people read this book in the set of their ideology and sect, as every sect has made their

This Ramadan gives us the best opportunity to connect ourselves with this book, change our selves. The best way to change our selves we have to read the Quran with understanding and in the context of the teachings of the Messenger of Allah. However, what is happening, now days the people are in the race to complete the book during the Ramadan in a mechanical way, which results we are not able to understand its core meaning and our life are not changing. It is not a hard and fast rule to complete the whole book in the month. However, the essential thing is to understand the message of Allah in the milieu of the teachings of the Prophet (S.A.W.) hence for that strategy we have to read it with meaning. If we read only a few verses every day and understand the message of these verses with the help of teachings of the Prophet (S.A.W.) that will undoubtedly change our lives.
According to the Dr. Israr, Ahmad there are five duties of every Muslim towards the Quran are:

Regrettably, some of the modern so called Muslim reading the Quran without understanding and without the context of the text, in this way spread the wrong notions about the Quran in the world. Even in the modern times, the anti Muslim forces create some groups in order to spread the negativity about the Islam. They also recite the different verses without context and miss quote these verses to deceive the people and interpret this holy book according to their own ways.

The authors  are the Research scholars at the Kumaun University Nainital , Uttarakhand.