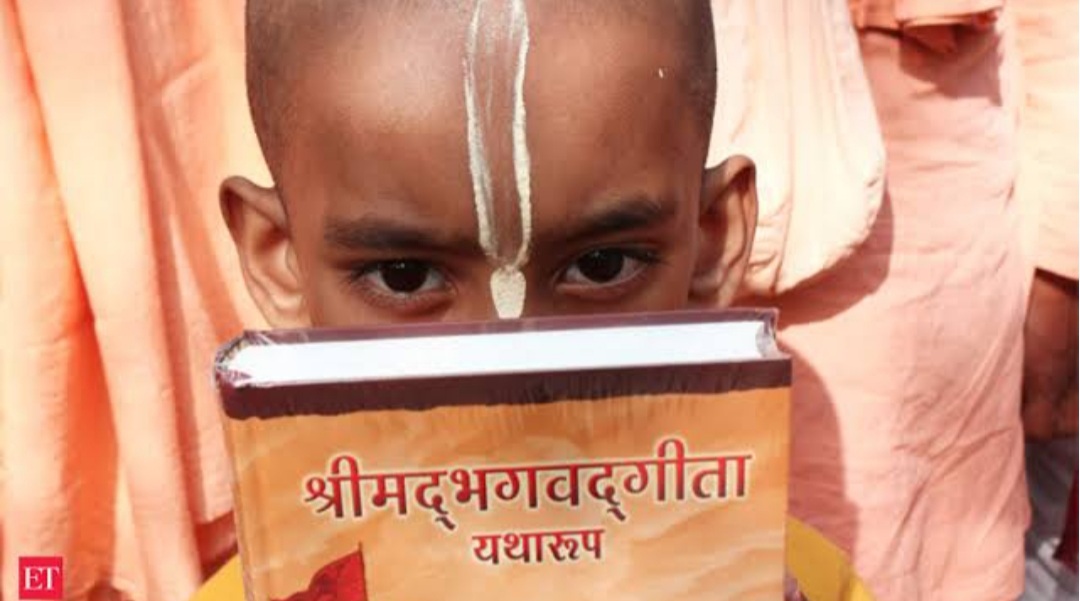 After the introduction of RSS founder Dr. Keshav Hedgewar and Jan Sangh founder Pandit Deendayal Upadhyay by the medical education department, now the higher education department has introduced chapters on Ramcharitmanas and Bhagwad Gita in syllabuses in colleges across the state.

As the Congress termed the move “destruction of education” and demanded that the government be more practical by introducing chapters on vocational courses leading to employment, the higher education minister Mohan Yadav defended the move saying that it is aimed at teaching culture to students.

“What is the harm in teaching about a country’s culture to students? If this is interpreted as saffronisation of education then yes we are saffronising the syllabus,” said Yadav.  The New Education Policy 2020 has been made for the betterment of all students. If we have Sanskrit in colleges we also have Urdu, added the minister.

–The new curriculum for the UG students of first year that was released 3 days ago comes into effect from this academic session. It has chapters like ‘Applied philosophy of Shri Ramcharitmanas’ as an optional subject in art stream.

–Another chapter ‘construction of the Ram Setu-unique example of engineering by lord Ram’, students will learn the engineering qualities of lord Rama.

–Other chapters included in the syllabus for personality development include topics like ‘highest qualities of human personality including Shri Ram’s obedience towards his father and extreme devotion’ and ‘Capacity to bear divine qualities and sign of higher personality’.

Meanwhile, Congress spokesperson K K Mishra said that the BJP dispensation is hell bent on destroying the education system of the country. “Children are sent to school and colleges to gain education. The government should try to make the syllabus more employment oriented and take steps in this direction,” said Mishra.

It may be recalled here that the M.P. Govt. last week decided to include the life and works of Jan Sangh founder Deendayal Upadhyay and RSS founder Dr KB Hedgewar in the Foundation Course for first year MBBS students in the state. The government also decided to teach the students about the ancient master of Ayurveda Charak, the ancient surgeon Sushustra, Swami Vivekananda and Dr BR Ambedkar.

Reacting senior doctors in Bhopal say that any content should be introduced into the syllabus for the MBBS course only if it is relevant to medical science. Whether it is a personality or a philosophy, it should have some meaning, some usefulness for the future doctors.

Dean, People’s Medical College, Dr Anil Dixit says that under medical ethics, currently, the students are basically taught about how to behave with the patients. “We also teach them about Sushru and scientists like Ronald Ross who contributed to the advancement of medical science,” he said. He said that political philosophers were not in the syllabus of medical courses. “What we teach to our students is decided by the National Medical Council and the Directorate of Medical Education of the state government,” he said.

Psychiatrist Dr R. N. Sahu says that all students, and in fact all persons, should know about the leaders and great men who contributed to the development of the nation. “I am not taking any names but the medical students should know about Gandhi, Nehru and others,” he said.

Dr Sahu says that if we don’t have knowledge about the great personalities of India, we will go farther from our roots and become westernised. “When we know about Hippocrates, why should we not know about the great Indians,” he said.

Psychiatrist Dr. Ruma Bhattacharya says knowledge never harms and it is always good to learn as much as we can. But the knowledge should be relevant to the work one is doing or would do in the future. “Learning irrelevant things has side-effects, which should better be avoided,” she said.