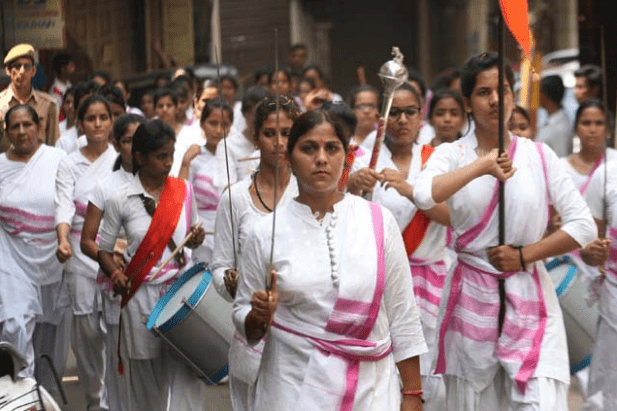 The RSS, contrary to the principles of democracy, constantly demanded India to be ruled under a totalitarian regime. Golwalkar while delivering a speech before the 1350 top level cadres of the RSS in 1940 declared,

“RSS inspired by one flag [saffron], one leader and one ideology is lighting the flame of Hindutva in each and every corner of this great land.”[i]

This slogan of one flag, one leader and one ideology was directly borrowed from the programmes of Nazi and Fascist parties of Europe.

The English organ of the RSS, Organiser, on the very eve of Independence (August 14, 1947) editorially chalked out its concept of nation in the following words:

Golwalkar Planned Massacre of Muslims on the Eve of Indian Independence

So RSS under Golwalkar was committed to the cleansing of Muslims from India. He was personally involved in this evil project as was corroborated by the first home secretary of Uttar Pradesh, Rajeshwar Dayal, and a senior bureaucrat in his autobiography.

“I must record an episode of a very grave nature when the procrastination and indecision of the UP Cabinet led to dire consequences. When communal tension was still at fever pitch, the Deputy Inspector General of Police of the Western Range, a very seasoned and capable officer, B. B. L. Jaitley, arrived at my house in great secrecy. He was accompanied by two of his officers who brought with them two large steel trunks securely locked. When the trunks were opened, they revealed incontrovertible evidence of a dastardly conspiracy to create a communal holocaust throughout the Western districts of the province. The trunks were crammed with blueprints of great accuracy and professionalism of every town and village in that vast area, prominently marking out the Muslim localities and habitations. There were also detailed instructions regarding access to the various locations, and other matters which amply revealed the sinister purport.

Greatly alarmed by those revelations, I immediately took the police party to the Premier’s [Govind Vallabh Pant of the INC] house. There, in a closed room, Jaitley gave a full report of his discovery, backed by all the evidence contained in the steel trunks. Timely raids conducted on the premises of the RSS (Rashtriya Swayamsevak Sangh) had brought the massive conspiracy to light. The whole plot had been concerted under the direction and supervision of the Supremo of the organization [Golwalkar] himself.[ii]

Of course, Pant an RSS mole in the Congress took no action despite Golwalkar present in the area. He was never charged for this attempt of massacre of Muslims.

It is well-known that the then Home Minister of India, Sardar Vallabh Bhai Patel, had a soft-corner for the RSS and continues to be a favourite with the RSS. However even Sardar Patel found it difficult to defend the RSS for its role in the post-Partition massacre of Muslims. In a letter written to Golwalkar (the then Supremo of the RSS), dated 11 September 1948, Sardar Patel stated:

“Organizing the Hindus and helping them is one thing but going in for revenge for its sufferings on innocent and helpless men, women and children is quite another thing…”[iii]

There are instances of other honest senior officials who had the courage to bring in public domain record RSS’ terrorist activities. How RSS spread hatred and terrorized minorities of India in less than a year of Modi first term as the PM (2014-19) of India was described in detail by one of the most decorated cops of India, Julio Ribeiro, former ambassador to Romania and recipient of the Padma Bhushan, a prominent national award in the following words. Petrified as a Christian, he wrote on March 17, 2015:

Today, in my 86th year, I feel threatened, not wanted, reduced to a stranger in my own country.  The same category of citizens who had put their trust in me to rescue them from a force they could not comprehend have now come out of the woodwork to condemn me for practising a religion that is different from theirs. I am not an Indian anymore, at least in the eyes of the proponents of the Hindu Rashtra.

Is it coincidence or a well-thought-out plan that the systematic targeting of a small and peaceful community should begin only after the BJP government of Narendra Modi came to power last May? ‘Ghar wapsi’, the declaration of Christmas as ‘Good Governance Day’, the attack on Christian churches and schools in Delhi, all added to a sense of siege that now afflicts these peaceful people.

Christians have consistently punched above their weight — not as much as the tiny Parsi community, but just as noticeably. Education, in particular, has been their forte. Many schools, colleges, related establishments that teach skills for jobs have been set up and run by Christians. They are much in demand. Even diehard Hindus have sought admission in such centres of learning and benefited from the commitment and sincerity of Christian teachers. Incidentally, no one seems to have been converted to Christianity, though many, many have imbibed Christian values and turned ‘pseudo-secularist’.

The Indian army was headed by a Christian general, the navy more than once, and same with the air force. The country’s defence forces have countless men and women in uniform who are Christians. How can they be declared non-Indians by Parivar hotheads out to create a pure Hindu Rashtra?

It is tragic that these extremists have been emboldened beyond permissible limits by an atmosphere of hate and distrust. The Christian population, a mere 2 per cent of the total populace, has been subjected to a series of well-directed body blows. If these extremists later turn their attention to Muslims, which seems to be their goal, they will invite consequences that this writer dreads to imagine.[iv]

What Golwalkar’s favourite RSS student, Modi did to Gujarat Muslims in 2002 would be clear from the following words of an editorial in a prominent English daily of India, Hindustan Times,

“Daughters were gang-raped in front of their fathers and then had their heads bashed in. Their fathers were doused with petrol and set on fire. Their property was looted. Their businesses were destroyed. And the police stood by and did nothing.[v]

In fact, the ‘Holy’ book for the RSS cadres  Bunch of Thoughts, has a long chapter titled as ‘Internal Threats’ in which Muslims and Christians are described as threat number one and two respectively. This chapter opens with the following statement.

“It has been the tragic lesson of the history of many a country in the world that the hostile elements within the country pose a far greater menace to national security then aggressors from outside.”[vi]

While treating Muslims as ‘Internal Threat’ number one, Golwalkar goes on to elaborate,

“Even to this day there are so many who say, ‘now there is no Muslim problem at all. All those riotous elements who supported Pakistan have gone away once for all. The remaining Muslims are devoted to our country. After all, they have no other place to go and they are bound to remain loyal’….It would be suicidal to delude ourselves into believing that they have turned patriots overnight after the creation of Pakistan. On the contrary, the Muslim menace has increased a hundredfold by the creation of Pakistan which has become a springboard for all their future aggressive designs on our country.”[vii]

He goes on to spit venom against common Muslims in the following words,

“…within the country there are so many Muslim pockets, i.e., so many ‘miniature Pakistans’…The conclusion is that, in practically every place, there are Muslims who are in constant touch with Pakistan over the transmitter…”[viii]

According to him every Muslim in India is untrustworthy and disloyal,

“Even today, Muslims, whether in high positions of the Government or outside, participate openly in rabidly anti-national conferences.”[ix]

While deliberating on the ‘Internal Threat’ number two, he says,

“Such is the role of Christian gentlemen residing in our land today, out to demolish not only the religious and social fabric of our life but also to establish political domination in various pockets and if possible all over the land.”[x]

This book from Guru of Hate, Golwalkar denigrates the Indian Constitution, concept of equality, justice and the Tricolour; the national flag. It attracts at least 20 Indian Penal Code charges but continues to be sold in all Indian languages and the best-seller for RSS.

RSS regards followers of Islam and Christianity as emigrant or foreigners and demands their cleansing as these two religions are declared to be foreign religions. However, RSS has no respect for Indian religions like Sikhism, Buddhism and Jainism as these are not treated as independent religions but part of Hinduism. Guru Golwalkar set the agenda by declaring that, “the Buddhists, the Jain, the Sikh are all included in that one comprehensive word ‘Hindu'”.[xi] In fact, Golwalkar learnt this denial to Sikhism, Jainism and Buddhism the status of independent religions from senior Hindutva icon, Savarkar who believed that the followers of,

“Vaidicism, Sanatanism, Jainism, Buddism, Lingaitism, Shikhism, the Arya Samaji, the Brahmasamaj, the Devasamaj, the Prarthana Samaji and such other religions of Indian origin are Hindus and constitute Hindudom, i.e., the Hindu people as a whole.”[xii]