In the ongoing coronavirus crisis, Ravish Kumar has emerged as a ‘messiah’ for many looking for medical help, earning superlatives of all sorts for standing by the desperate Indians

Noted journalist Ravish Kumar, who is unquestionably the most powerful voice in TV news media, is earning a plethora of superlatives these days, not for his journalism this time but for his charitable move: standing by the desperate Indians looking for medical assistance in the devastating outbreak of Covid’s second wave.

For a change, he is not earning the praises for his profession but, this time, for using his goodwill to ensure medical help to scores of people who were failed by the system. Himself infected with the novel virus, Mr Kumar “invests significant hours” taking up frantic calls for oxygen, bed, drug, plasma therapy et al.  In one of his blog posts, Mr Kumar, who is unquestionably the most powerful voice of TV journalism, admitted that his efforts to ensure medical help to the needy met with “success rate of zero”. This admission of truth – a rare trait found in the industry he belongs to – makes him a great human being, nonetheless the expression also occupies a journalist’s take on the chaotic situation as well.

Mr Kumar’s Facebook account tells us that scores of social media users reached out to him with requests  to share their posts in the hope of getting attention of the authorities amid acute shortage of medical equipment.

The NDTV’s popular “Prime Time” anchor, who coined the pejorative term Godi Media (lapdog media), rightly observed that the coronavirus crisis “is because of arrogance” of one person for which “people are paying the price”, even as he has remained mindful of the ‘popular mandate’ the Narendra Modi government enjoyed, indirectly questioning the popular political wisdom of the people.

At the time of crisis, the people pin hope in Mr Kumar because of his heart-touching coverage on issues wherein he often makes it point to raise people’s concerns unlike host of other anchors whose prime tasks have been to divide people along communal lines, shun opposition parties and discover larger than life persona of Prime Minister Narendra Modi. 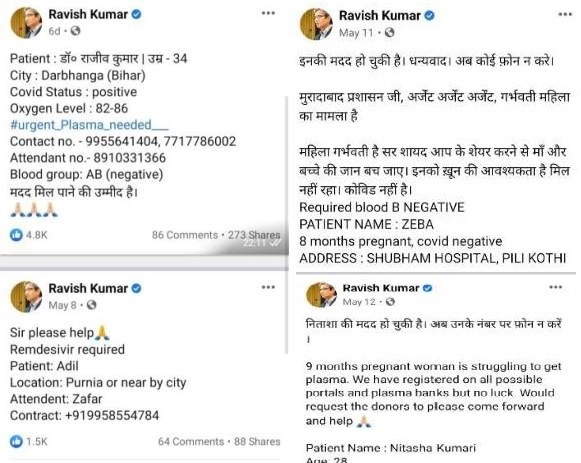 He writes, “You have been cruel. You were first given the intoxication of religion and then stabbed in your back. The gang of Fraud people is arguing that if half the population falls ill, any hospital fails. Fools have not told how many hospitals you have built, how many ventilators have you installed, how many testing centers have you set up? Journalists kept asking where did the PM Care Fund money go, but arrogance is in the seventh heaven. There is no need to answer. Let it go”

In 2019, co-founder and executive co-chairperson of NDTV news channel, Prannoy Roy, had tweeted that Ravish Kumar is a great journalist, and a really wonderful human being too. This has been proven on several occasions.

Interestingly, Mr Kumar is also being tagged for help by those who hurl abuses on him for questioning people in power. However, he is not oblivious to the fact that those who seek their help will soon switch to their WhatsApp university lapping up all the hate-filled messages served to them by the BJP IT-Cell. But, as expected, the Raman Magsaysay award winner remains unfazed by it and does what as a human being he is ought to do. A big stone never moves in a little storm.

To me calling him an “anti or pro for this or that” is poor understanding of journalism, a disservice to his painstaking efforts. In the sharply divided society, he might be hailed by one section and assailed by the other, but truly speaking he belongs to the neither. The people’s journalist simply, and rightly, defines his journalism as “Speak the truth, stand by the weak and persecuted, and question those in power.”

Most of the civilians being killed by terrorists in Kashmir are Muslims : Ravish Kumar