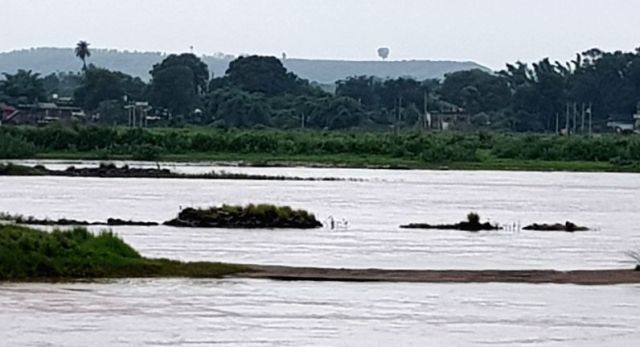 Mandla : It was at this quiet riverside town of Madhya Pradesh that one of India’s best known modern artists, S.H. Raza, fell in love with nature and began to find pleasure in it. Nine decades on and the picturesque sight — lush with green foliage and river Narmadas nurture — emanates a calm, meditative energy that Mandlas son held close throughout his life.

Mandla lies at the end of a long, serpentining road from Jabalpur, is dotted with villages and small towns, sprawling green farmlands and low hills. It may not top the lists of possible tour destinations but on a closer look, one finds a rawness about the place that the renowned artist drew inspiration from.

The immediate surrounding, still lulled in yesteryear’s charm, and blessed with nature’s bounty come across as something soft and subtle for the traveller, calming one’s mind — just as one can imagine them calming Raza’s.

And it was not a coincidence that Raza was born here. More like a plan of destiny, Raza’s old and well known family from Delhi, had lived in what would later become India’s capital, till the first war of independence in 1857. But they knew that they must leave Delhi as they had opposed the British rule.

Some of his family members left for Bundelkhand, Raza recalled in “Itinerary” (originally written in French in 2003), and began a new life there while his grandfather’s love for forests pulled him to Mandla. His father also loved forests and would later become the Deputy Forest Ranger in the region.

But art found Raza, or rather Raza found art, in Mandla. A dusty enrollment register in a village, where Raza and his two brothers were schooled for a brief while, still holds their names in beautifully written Hindi letters.

It was here that his most iconic and widely recognised motif of the “bindu” was born. When asked to concentrate on a small dot made on the school wall by his teacher Nandlal Jharia, Raza first deemed it only to be a exercise in self-discipline.

However, later he began to meditate on the bindu, and as he writes: “One night, in Gorbio, in the south of France, I had the enlightenment about bindu which was a starting point for me.”

Before going to Nagpur School of Art, and later Mumbai’s J.J. School of Art, the iconic painter’s tryst with all things artistic had already found utterance. He had begun to paint what he saw around him — the rivers, the gardens and villages.

The painter would later shift to France in 1950s and return in 2010 but all through this journey, he made it a point to regularly visit India, and often Mandla, which seemed to replenish his love and gratitude for the place.

“I opened my eyes in the village of Kakaiya, in Madhya Pradesh. My most vivid memories are those of the forest of Mandla. It is there that I began to see,” he had written.

“The ghats were superb. There was a Gond fortress, some splendid temples with statues. Our residence was on the edge of the city, from where the forest began, without any construction between the two, and one could see the Narmada. It was very beautiful.”

What meanders through clusters of these forests is the linchpin of life in the small town populated by just several thousand people — Narmada. The deep connection Raza shared with Narmada stayed with him through most of his life.

He writes of Narmada as nearly encircling the city of Mandla like a “pushpanjali” or an offering of flowers. He also called the river floods supernatural and incredible, and later wrote about his fascination with it as something that “could become a source of anguish, could even kill”.

Even after nine decades of his childhood encounters with the nature, the forest villages surrounding Mandla are bereft of indicators of modernity and commercialisation, and emanate stillness and pristinity. The unpolluted air, a pristine environment, and a sustenance-based rural lifestyle seem to be nature’s way of painting its own virgin and unadulterated beauty.

The Raza Foundation, set up by the late painter himself in 2001, recently organised “Raza Smriti” a five-day multiarts event. The programme sought to bring art out of silos and engage locals in the creation of art, as a way of remembering him on his second death anniversary.

Participatory workshops and musical programmes held at the Narmada’s shore turned out to be interesting outlets for creativity and arts appreciation among locals.

Raza was awarded the Padma Shri in 1981, the Padma Bhushan in 2007, and the Padma Vibhushan in 2013. He was conferred with the highest French civilian honour, the Commandeur de la Legion d’honneur (Legion of Honour) on July 14, 2015.

He passed away in July 2016 at the age of 94 and upon his will, now lies buried in a small graveyard in Mandla, next to his father.

(Siddhi Jain was in Mandla at the invitation of the Raza Foundation. She can be contacted at siddhi.j@ians.in )