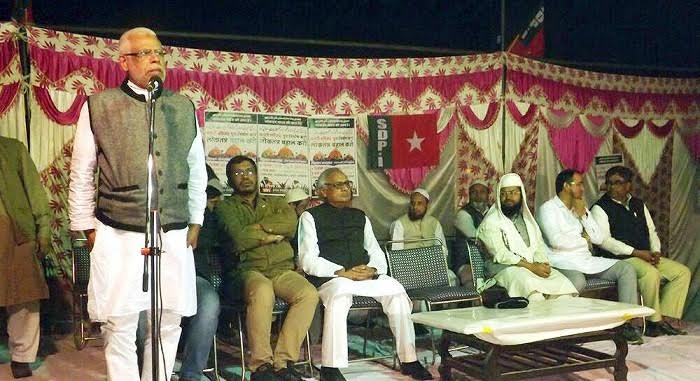 New Delhi: Social Democratic Party of India organized nationwide campaign to create awareness about the episode of Babri Masjid demolition by Hindutva fanatics. The party had organized a massive public meet at Khajuri in the national capital, despite resistance from the administration and police department, the programme was concluded peacefully. The public meet was presided over by Party president A Sayeed.

A Sayeed in his address, said secularism is India’s life. The party president urged the present dispensation to fulfil the promise the then prime minister had made to the people of India that is to rebuild the Babri Masjid in the same place, which was demolished by the Hindutwa fanatics. He further said, unless justice is delivered, secularism would continue to undermine in the society. Reiterating his party’s commitment Sayeed said, Social Democratic Party of India is committed to uphold the values of unity in diversity and save secularism.

Vice President Adv. Sharfuddin Ahmad said the entire country is in fear and insecurity due to the rampant goondaism by anti social elements who are enjoying imputing under the present regime. He said, SDPI will continue its fight for justice for Babri Masjid come what may.

Mohammed Shafi slammed the ruling government for it has become a puppet of corporate and is continuing oppression on the common man by introducing anti-people schemes.

The program was attended by a large gathering apart from hundreds of party cadres and members.