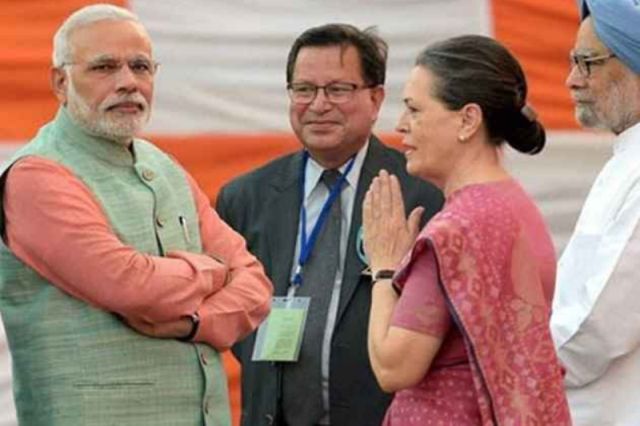 New Delhi : Prime Minister Narendra Modi has said that there has been significant improvement in the internal security situation in the last four years with “recurrent terror attacks that were common under the UPA” now being history and Maoist violence declining by 20 per cent in the affected areas.

In an interview with ‘Swarajya’ magazine, the Prime Minister said: “I would like to salute our brave security forces who are eternally vigilant and are ensuring peace as well as prosperity for 125 crore Indians.

“You can ascertain our security situation from the fact that recurrent terror attacks that were common under the UPA are now history.”

Describing his vision for Jammu and Kashmir, which is under Governor’s rule after the BJP withdrew its support last month from the ruling coalition led by the PDP, Modi said: “In Kashmir, our goal is good governance, development, responsibility and accountability.”

Asked about possibility of dialogue with stakeholders in Kashmir, he avoided a direct answer.

“We have appointed an interlocutor and he is in touch with many people. He is travelling to the interiors and engaging with people.”

On Maoist front, the Prime Minister said geographically, the influence of Maoist violence has shrunk substantially.

“The numbers vis-a-vis Maoist violence in the last four years should make every Indian happy. Maoist violence has declined by 20 per cent in the affected states, with a concomitant reduction of 34 per cent in deaths in 2017 compared to 2013,” he said.

Asked whether the area under Left Wing Extremism (LWE) has really shrunk, Modi said 44 out of 126 districts have been removed from the list of LWE-affected areas based on changed ground realities.

“These are the districts that did not see any violence for the last four years.

Asserting that only development can solve people’s problems, Modi said that his government adopted the approach to devote unparalleled resources towards the development of areas prone to violence.

“It is true that Maoist violence had stalled the progress of many districts in central and eastern India. That is why in 2015, our government formulated a comprehensive ‘National Policy and Action Plan’ to eradicate Maoist violence.

“Along with zero tolerance towards violence, we have also focused on a massive push to infrastructure and social empowerment to bring a positive change in the lives of the poor people in these regions.

“The unparalleled development focus is reaping rich dividends,” he said, adding that about 4,500 km of roads have already been built in 34 Maoist-affected districts.

“Work at such speed and scale was not even imaginable,” Modi said.

Asked about the threat to his life, the Prime Minister said: “Whenever I am travelling, I see that a lot of people, from all age groups and sections of society, are out on the streets to greet me and welcome me.

“I can’t just remain seated in my car, aloof from their display of affection and care. That is why I invariably get down and greet, interact with people as much as I can.

“I am not a Shahenshah or an imperious ruler who is unaffected by their warmth. Being among people gives me lot of strength,” he said.

Modi also said the security situation in the Northeast has improved tremendously.

“In 2017, we had the lowest insurgency-related incidents and casualties among civilians and security forces in the last 20 years,” he said.