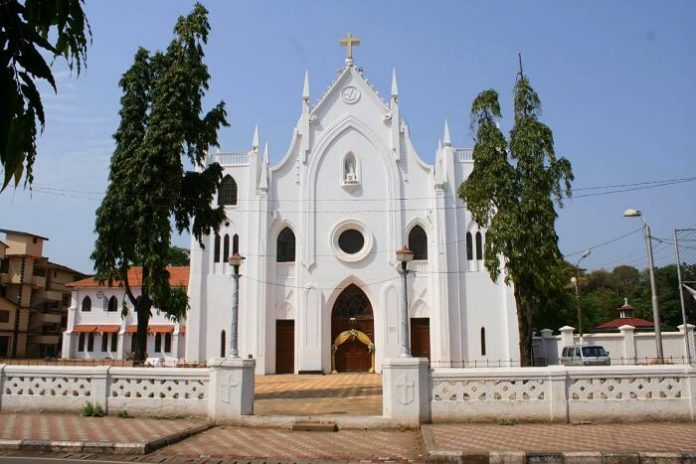 Panaji, March 26 :  Urging the electorate to reject the “terror of pseudo-nationalism”, the Council for Social Justice and Peace, the social wing of the influential Goa Church, urged voters on Tuesday to take on “corrupt defectors” and political opportunists.

The statement by Fr. Savio Fernandes, Executive Secretary of the Council, which functions as a Church-backed NGO, comes at a time when the state gears up Lok Sabha elections.

“Let us also give corrupt defectors and opportunists the due electoral response. Let us not be carried away by petty and trivial issues but think of the overall interest of the nation and of our state,” Fernandes said in a statement issued here.

While Goa is heading for two Lok Sabha elections, the coastal state is also gearing up for three Assembly by-polls, two of which have been necessitated after two Congress MLAs quit their legislatorship to join the Bharatiya Janata Party last year.

“When rightful and timely information is denied, reports and surveys tweaked to suppress inconvenient facts, critical dissent crushed by labelling it as anti-national and as urban Naxalism, when hoodlums run riot on streets in the guise of nationalism – the defensive counter claims of ‘no corruption’ and ‘scam free governance’ become totally hollow,” the Council said, while also raising issues related to cow vigilantism, love-jihad and “other forms of cultural extremism”.

Speaking specifically about Goa, Fernandes in his statement said that political defections were tearing at the very fabric of democracy, while urging people not to vote for defectors.

“Another evil is the blatant engineering of defections in violation of the people’s mandate. Moreover, persons who deceive and betray people’s trust should have no scope in democracy,” the statement said.

The Roman Catholic Church is an influential socio-religious body in the coastal state, where Catholics account for nearly 26 per cent of the state’s population.

The statement, which severely critiques the BJP-led coalition governments both in Goa as well as at the Centre, without naming them, comes a few days after Archbishop Filipe Neri Ferrao in a condolence message following the death of Chief Minister Manohar Parrikar paid glowing tributes to governments-led by the BJP leader while also praising his spirit of secularism.