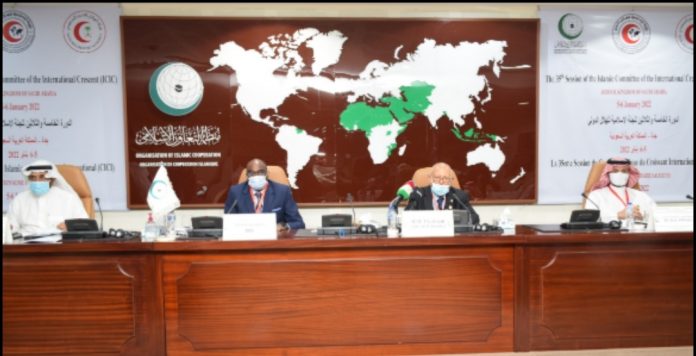 Jeddah: The Organization of Islamic Cooperation (OIC) called on Islamic countries to help victims of natural disasters, conflicts, and wars around the world on Wednesday. The OIC also encouraged strengthening Islamic Solidarity in humanitarian aid for disaster and conflict-affected populations in the Islamic World at the commencement of the 35th meeting of the Islamic Committee of the International Crescent (ICIC) today.

The OIC’s ICCI is a specialist organ. The OIC’s 35th session, which will last two days, started today at the OIC headquarters in Jeddah. The ICIC meeting, held under the patronage of the Kingdom of Saudi Arabia, the Islamic Summit’s chair country, considers the most recent updates on the ICIC’s humanitarian and relief assistance work to natural disaster-affected populations and internally displaced persons (IDPs) across OIC Member States, as well as the need to maintain cooperation and coordination in humanitarian action and follow-up on irregular migration issues.

The OIC Secretary General, Hissein Ibrahim Taha, said in a statement read on his behalf by Assistant Secretary General for Humanitarian, Cultural, and Social Affairs Amb. Tareq Bakheet, that the Committee was meeting at a time when a new reality is forming across the Muslim world, posing serious humanitarian challenges that can only be addressed through genuine solidarity action.

The General Secretariat pays special attention to the ICIC’s and other humanitarian organisations’ efforts to alleviate the suffering of victims of disasters, conflicts, and wars throughout the Muslim world. He described the ICIC’s 35th meeting as a new milestone in the pursuit of closer coordination and cooperation for these noble humanitarian goals.

Moreover, he commended the efforts of the Kingdom of Saudi Arabia, under the leadership of the Custodian of the Two Holy Mosques, King Salman bin Abdulaziz Al Saud, Chair of the Islamic Summit.

He also thanked the ICIC and all Red Crescent and Red Cross institutions for their onerous work during disasters and humanitarian crises, particularly in response to the coronavirus pandemic’s brunt on the Muslim world.

Also significant, the Secretary General stressed the OIC’s readiness to channel all its potential to assist the ICIC in its earnest efforts to deliver aid to victims of natural and man-made disasters.