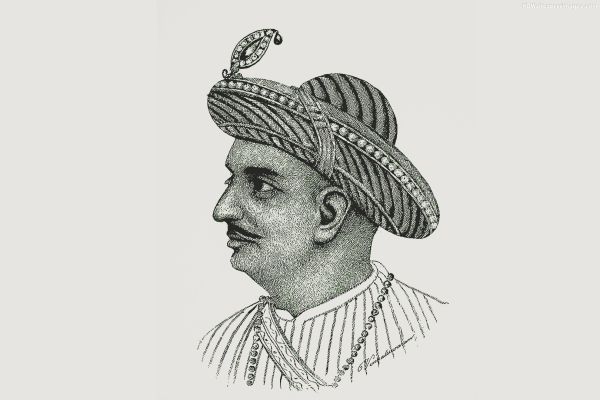 Tipu Sultan, the ‘Tiger of Mysore’, was a great visionary who exposed the expansionist designs of the British imperial forces and gave a clarion call to his fellow countrymen and native rulers to  unite and fight against the East India Company.

Tipu was born on 10 November, 1750 at Devanahalli village of Kolar district, Karnataka State to  Hyder Ali, who was famous as ‘the Nepoleon of South India’ was his father and  Fatima Fakhr-un-nissa was his mother. He received proper training in martial arts and participated in several wars along with his father.  Tipu became the ruler of Mysore in 1782, after the death of his father Hyder Ali.  While taking charge of Mysore he declared to his people : ‘If I oppose you I could lose my paradise, my life and my happiness. The happiness of the people is my happiness. I don’t think that whatever I like is good. But, I consider that whatever is the wish of my people is my wish. Those who are the enemies of my people are my enemies. And those who are troubling my people are deemed to be declaring war against me.’ Tipu kept his promise all through his life.

While  facing continuous attacks  by the Nizam  of  Hyderabd and the Marathas, Tipu sultan was able to expand  his kingdom from  River Krishna in the North to Dindigal in the South, for about 400 miles and from Malabar in the West to the Eastern Ghats, about 300 miles, in his 17 year rule.

Tipu Sultan encouraged modern trade, industry, agriculture and civil engineering. He tried to reform petty criminals by assigning them community work just like plantation etc., as punishment. Tipu Sultan was a polyglot; he was well versed in Kannada, Telugu, Marathi, Arabic, Persian, Urdu and French. He worked hard for the promotion of education.

Tipu , like his father held  a secular  outlook and was  impartial towards all religions. The British identified Tipu as their enemy number one in south India. The jealous Nizam of Hyderabad and Marathas could not digest the success of Tipu and joined hands with the East India Company against him. They all attacked Srirangapatnam, capital of Mysore state, which led to the historical fourth war of Mysore. Tipu sultan entered the battlefield of  Srigangapatnam  to defend his people and the state,  Due to treason committed by his diwan, Mir Sadiq and others who paved the way for the enemy to enter the fort of Srigangapatnam, Tipu Sultan suffered defeat.  He died on 4 May, 1799 fighting against enemy in the battle field.