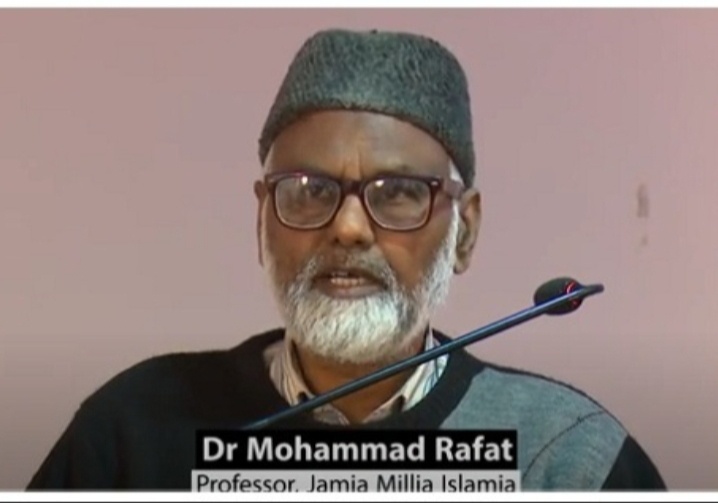 He was 65 years of old and is survived by three sons, two daughters and his widow. His widow-Nusrat-is the daughter of former President of the JIH and a well-known Islamic scholar, Maulana Syed Jalaluddin Umari.

In the presence of hundreds of mourners, he was laid to rest today  at the graveyard in Shaheen Bagh area. His funeral prayer was be held on Saturday evening here at the JIH Markaz mosque (Masjid Ishat-e-Islam).

Expressing condolences over his death, JIH President Syed Sadatullah Husaini said: “The demise of Dr Rafat is a great loss for the Muslim Ummah, the Islamic Movement and the entire country. He was a leading intellectual, tremendous leader, firm ideologue and a benevolent mentor. He was an erudite scholar of Islam and a prolific writer. He was blessed among many qualities with a razor sharp memory and an unmatched ability to give speeches on a myriad of topics without any notes in such a coherent manner that it would appear as if he is reading a written essay. He led an extremely simple life and had a very pleasant disposition. He was a teacher of theoretical physics. This subject of science has a deep connection with philosophy, so he made a direct study of philosophy and important ideas of science from its original sources. As one of the foremost ideologues of Jamaat, he always upheld and acted on the basic and core principles of Islam. May Allah forgive his sins and grant him the highest Paradise.”

A native of Khurja in Bulandshahr district of the Western UP, Dr. Rafat did his MSc in Physics from the Aligarh Muslim University in 1976 and PhD from IIT-Kanpur. He joined Jamia Millia Islamia in 1985, one year after receiving his PhD degree. He retired as Professor- Department of Applied Sciences and Humanities from the Jamia Millia on July 31, 2020.

Dr. Rafat, who was associated with the Islamic movement ever since his student days, was a member of the Central Advisory Council, the highest decision-making body of the Jamaat-e-Islami Hind from 1999 till his death. He wrote more than 15 books on various subjects in Urdu and English languages.

Besides being director of the Centre for Study and Research (CSR) of JIH, for the last two years, he had also previously worked as chairman of the JIH’s Tasneefi Academy (Authors Academy) and all India secretary of the Jamaat’s Tarbiyah Department (Training Dept.). He also served as the JIH President of Delhi and Haryana from 1995 to 2011. He had also worked as honorary editor of Urdu monthly, Zindagi-e-Nau, an Islamic research magazine, from 2009 to 2019. Besides, he headed several important committees of the JIH for policy-formulation and the creation of new institutions and allied organizations.

Those who abandoned acquiring new skills fell behind and became backward : Sadatullah Husaini