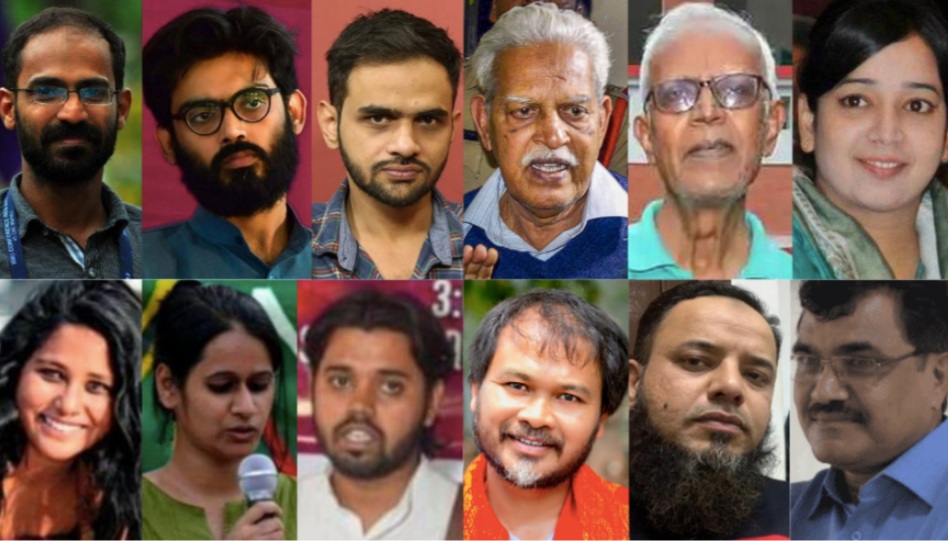 New Delhi: A group of more than 110 prominent retired civil servants and Police officers on Monday expressed grave concern over the  gross misuse of the Unlawful Activities (Prevention) Act (UAPA) at the hands of ruling politicians. They termed the UAPA in present form a serious threat to the freedom of citizens and to democracy.  They demanded to enact a fresh law to replace UAPA after consulting legal experts and taking into account the views of Parliament.

In an open letter to the Union Government and to general citizens, retired civil servants said  (UAPA violates the Constitutional guarantees of citizens’ fundamental rights.

“Though this law has been in existence in India’s statute books for over five decades, the harsh amendments it has gone through in  recent years has made it draconian, repressive, and amenable to gross misuse at the hands of ruling politicians and the police”.

Typical  of such misuse are the cases of the three anti-CAA student protestors – Devangana Kalita, Natasha Narwal and Asif Iqbal Tanha – who were arrested under UAPA without any valid grounds but were recently granted bail by the Delhi High Court in a detailed and unprecedented order, they undelined.

On 9 March 2021, the Union Minister of State for Home, G. Kishan Reddy, in a written reply to the Lok Sabha, admitted to the uncommon overuse of the UAPA. He confirmed that 1948 persons were arrested under the UAPA in 1226 cases across the country in 2019, which showed a 72% increase as compared to 2015.

The following figures will show the increase in cases and arrests between 2015 and 2019:

Despite the large number of arrests under the UAPA, the number of prosecutions and convictions shows a steep decline.

The Government of India has admitted that a mere 2.2% of the cases registered between 2016 and 2019 resulted in conviction.

Highlighting above figures, they said the vast majority of the arrests under UAPA were made on specious grounds just to spread fear and muzzle dissent.
The UAPA has a chequered history. This legislation, first passed in 1967 on the recommendations of the National Integration Council to combat communalism, casteism, regionalism and linguistic chauvinism and to deal with associations engaged in secessionist activities, has changed colour over time and has now become a statute that has created new categories of offences and punishments.

The UAPA was not used extensively prior to the last decade as the Government of India had, meanwhile, enacted preventive detention laws such as the Maintenance of Internal Security Act (MISA-1971), the National Security Act (NSA-1980), the Terrorist And Disruptive Activities (Prevention) Act (TADA-1987)   and The Prevention of Terrorism Act (POTA-2002). But after the 9/11 terror attack on the USA, the UN Security Council passed a resolution asking national governments to enact countrywide anti-terror laws. The Government of India complied by passing the UAPA Amendment Act, 2004, carrying stringent provisions to suppress terrorism.

However, the Government of India seriously departed from the principles of criminal jurisprudence and from the provisions of the Constitution when the UAPA (Amendment) Act, 2008 was codified after the 26/11 Mumbai terror attack. This was done during the tenure of the United Progressive Alliance (UPA) government. Successive UPA and NDA Union governments which have been or are in power are responsible for the extreme stringency of the UAPA.

In 2008, the UPA government made bail provisions much more stringent, increased the pre-charge detention period from 90 days to 180 days and, most damagingly, placed the burden of proof on the accused.

In 2019, the NDA government further amended the UAPA to allow individuals, not merely organisations, to be designated terrorist. This amendment also gave unfettered and autocratic powers to the executive, in particular the National Investigation Agency (NIA), to enter any State and arrest any person. Though some voices of protest were raised when these amendments were made, most political parties supported the move. For the UPA members or any other party to act outraged now is, therefore, disingenuous.

The most shocking of the arrests under the UAPA have been of persons accused in the Bhima-Koregaon case. Several well regarded activists who have fought throughout their lives for the rights of tribal people and other oppressed groups have been arrested as terrorists and, even today, languish in jail. . The names of those arrested are well known – Sudha Bhardwaj, Rona Wilson, Gautam Navlakha, Anand Teltumbde, Arun Ferreira and Varavara Rao, to name a few.  And, of course, Father Stan Swamy – an 84 year old Jesuit priest – suffering from Parkinson’s and other ailments, who was not granted bail despite repeated requests and eventually died while in custody.

Former judge of the Patna High Court, Justice Anjana Prakash, is on record stating that 66% of the total numbers of persons booked under the UAPA were for conspiracy without any allegations of accompanying acts of violence. She also revealed that out of the total number of 386 cases being investigated by the NIA, 74 cases were for non-UAPA offences while 312 pertained to UAPA offences. She added that NIA has not been able to submit charge-sheets in 56% of these cases, meaning that the accused in these cases still remain in custody. These figures definitely point to an unhealthy practice of “governance by fear” which has no legitimate place in a democracy.
They underlined that the law, as it stands today, has many flaws and loopholes making it amenable to large scale abuse and misuse by some politicians and overzealous policemen.

Things have come to such a pass that at a recent webinar on “Democracy, Dissent and Draconian Laws”, organised by the Campaign for Judicial Accountability and Reforms, four former Supreme Court judges – Justices Aftab Alam, Madan B Lokur, Gopala Gowda and Deepak Gupta – came down heavily on UAPA and sedition laws and the way they are being misused to suppress democratic dissent and curb fundamental rights. Justices Gopala Gowda and Deepak Gupta were of the view that since Section 43D(5) of the UAPA takes away the power of courts to grant bail and order a judicial review, the law is unconstitutional. All the former Supreme Court judges agreed that the UAPA should not remain in the statute book in its present form.

We believe, like them, that such a draconian law has no place in a civilised society, particularly in a country claiming to be the world’s largest democracy,  ex-bureaucrats said .

Reminding Prime Minister Narendra Modi to his speech at the G-7 Summit in Cornwall, United Kingdom, they said  ‘If the Prime Minister is true to his word, his government should heed the call of legal luminaries and the ordinary public, appreciate that the UAPA in its present form poses a serious threat to the freedom of our citizens and to democracy and, after consulting legal experts and taking into account the views of Parliament, enact fresh legislation to replace the UAPA .