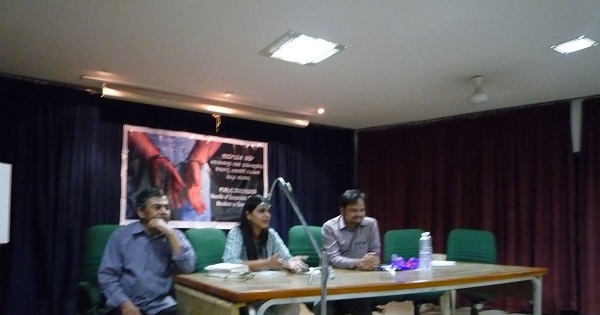 Bangalore, April 7: Some civil rights groups on Saturday released a 30-page report, “Permanent Suspects- Framing Muslim Youth in Karnataka” on the targeting of Muslims in terror cases in the BJP-ruled state in last five years. The report details the implication of around three dozen Muslim youths in various terror cases including the last year’s infamous terror conspiracy case.

Introducing the report, Professor Sreedhara of Peoples’ Democratic Forum, stated that a need was felt for a probe into how people from one community are being targeted, and the report documents the stigma attached to persons even falsely charged in terror cases, and the loss of life, dignity and livelihood.

“Karnataka has of late become a soft target for terrorist attacks, according to IB. Whether it is so or not, what is certain is that Karnataka has become a testing ground for Sangh Parivar which has managed to spread communal venom not only among certain sections of society, but also among administration. The repeated incidents of moral policing and attack on minority communities are glaring examples of a growing communalization in our society. It is also a matter of certainty that all the five cases mentioned above have not happened in isolation, but have a political context provided by the rise of BJP to power in Karnataka. These and other cases have been repeatedly foisted on Muslims in order to project them as the face of terror. In fact, some parents of the accused we met observed that such cases have become a regular feature, occurring unfailingly before every election. They felt that the earlier pattern of creating communal disturbances before or during elections has given way to a new design wherein terror cases are foisted against Muslims in order to garner Hindu votes. It is a moot question whether these attempts have yielded results. However, the BJP has managed to get enough political mileage out of these criminal acts,” says the report.

“In this report we provide a brief account of the five conspiracy cases in which these Muslim youth were implicated, followed by individual stories of people and their families we met in Belgaum and Hubli. In the end, we present our findings about instances of human rights violation and our appeal to the state, the media and civil society.”

The report chronicles five terror cases wherein Muslim youths were arrested including: The Hubli Bomb Blast Case of May 10, 2008; APMC Conspiracy Case wherein during the Assembly elections the police claimed to have unearthed a ‘conspiracy’ to produce a bomb blast in the APMC yard in Tilakwadi, Belgaum; The Saffron Flag-burning Case of 2007 in Hubli; and The Bangalore Assassination Conspiracy Case of August 2012.

“We specifically wanted to know how the families coped with the arrest and, in the case of those acquitted, what their present situation is. With this in view a team of human rights activists drawn from PUCL, PDF and NCHRO visited Belgaum and Hubli on 19th and 20th of November 2012. The team members met three families in Belgaum (two of them had their wards acquitted) and seven families in Hubli, where all the accused were still under various stages of trial…” read the report

Speaking of his experiences, terminated DRDO junior scientist Aejaz Mirza lamented, not only the loss of his job at DRDO, where he was one of the very few Muslims ever to be appointed but also the trauma that his family went through in trying to contact him after he was arrested. Journalist Siddiqui spoke about how he still carries the stigma of being accused a terrorist, despite being acquitted. He also questioned the hypocrisy of the media in demanding an apology and compensation from the state for his illegal incarceration, when they themselves are not willing to apologise for the malicious manner in which they portrayed him to be a terrorist. Yusuf Nalbandh spoke about the trauma caused to his aged mother, who had to face the intense public scrutiny to which she had no answers.

Adv. S.A.H Razvi detailed the manner in which most terror cases are concocted, and innocent people are framed, which is best illustrated by the arbitrary manner in which investigations are conducted.

Prof. Manisha Sethi of Jamia Millia Islamia informed the gathering of her experiences in documenting the numerous false terror cases heaped on innocent Muslim youth across Delhi. In particular, she spoke about the Batla House encounter case, and the travails of the innocent Muslim youth who lost substantial periods of their lives behind bars because of the false cases foisted on them by the Delhi Police Special Cell.