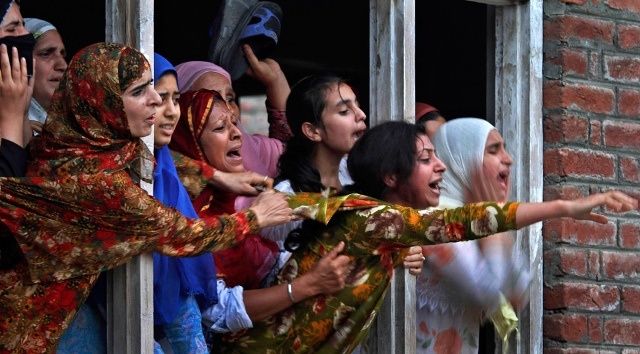 New York:  As August 5 marks the third anniversary of the  reading down of the Article 370 and partition of Jammu and Kashmir, the international rights body Human Rights Watch  on Friday alleged that insecurity among Kashmiris has worsened as a result of the Indian government’s “repressive tactics and unwillingness” to look into and prosecute reported security force abuses.

Releasing a statement on the occasion, HRW alleged that the Indian authorities are restricting free expression, peaceful assembly, and other basic rights in J&K three years after revoking the region’s special autonomous status.

On August 5, 2019, the Indian government, promising security and reform, revoked the constitutional autonomy of Jammu and Kashmir and split the state into two federally governed territories.

The  HRW said the Indian government action was accompanied by serious rights violations including arbitrary detention of hundreds of people, a total communications blackout, and severe restrictions on freedom of movement and peaceful assembly. Since then, the authorities have released many of the detainees and restored the internet, but have intensified their crackdown on media and civil society groups, including through frequent use of counterterrorism and public safety laws.

“Three years after the government revoked Jammu and Kashmir’s constitutional status, the Indian authorities appear to be more concerned with projecting an image of normalcy than ensuring rights and accountability,” said Meenakshi Ganguly, South Asia director at Human Rights Watch. “The government needs to end the assault on fundamental freedoms and act to protect minority groups at risk.”

“The authorities have invoked the Jammu and Kashmir Public Safety Act, as well as terrorism allegations, to conduct raids and arbitrarily detain journalists, activists, and political leaders without evidence and meaningful judicial review. The authorities have also barred several prominent Kashmiris from traveling abroad without providing reasons,” the statement added.

Since August 2019, militants have killed at least 118 civilians, including 21 people from minority Hindu and Sikh communities.

It pointed out that, “In November 2021, the authorities arrested a prominent Kashmiri human rights activist, Khurram Parvez, on politically motivated charges under the abusive counterterrorism law, the Unlawful Activities Prevention Act (UAPA). Parvez, 44, is the program coordinator of the Jammu and Kashmir Coalition of Civil Society and the chair of the Asian Federation Against Involuntary Disappearances. He has documented cases of enforced disappearances and investigated unmarked graves in Kashmir, and as a result, the Indian authorities have repeatedly targeted him for his human rights work”.

United Nations human rights experts, calling for his immediate release, expressed “regret that the Government continues to use the UAPA as a means of coercion to restrict civil society’s, the media’s and human rights defenders’ fundamental freedoms.”

It further  underlined that, “Journalists in Kashmir face increasing harassment by security forces, including raids and arbitrary arrests on terrorism charges. Authorities in India have shut down the internet more often than anywhere else in the world. A majority of those shutdowns have been in Kashmir, where they are used to curb protests and access to information”.

Since August 2019, at least 35 journalists in Kashmir have faced police interrogation, raids, threats, physical assault, restrictions on freedom of movement, or “fabricated” criminal cases for their reporting.

“In June 2020, the government announced a new media policy that made it easier for the authorities to censor news in the region. In 2022, the authorities rearrested Fahad Shah, Aasif Sultan, and Sajad Gul under the Public Safety Act after they had been granted bail separately in other cases filed against them in retaliation for their journalism work”.

The HRW said that, “Since 2019, the security forces have been implicated in numerous abuses including routine harassment and ill-treatment at checkpoints, arbitrary detention, and extrajudicial killings”.

In March 2021, five UN expert mandates wrote to the Indian government seeking information about the detention of a Kashmiri politician, Waheed Para; the alleged killing in custody of a shopkeeper, Irfan Ahmad Dar; and the enforced disappearance of Naseer Ahmad Wani, a resident of Shopian district. They raised concerns about “the repressive measures and broader pattern of systematic infringements of fundamental rights used against the local population, as well as of intimidations, searches, and confiscations committed by national security agents.”

It alleged that “there has been no accountability for these recent alleged extrajudicial killings or past killings and abuses by security forces, in part because of the Armed Forces (Special Powers) Act (AFSPA), which gives members of the armed forces effective immunity from prosecution. Since the law came into force in Jammu and Kashmir in 1990, the Indian government has not granted permission to prosecute any security force personnel in civilian courts. Rights groups have long documented that the law has become a tool of state abuse, oppression, and discrimination, and called for its repeal”. Affected residents, activists, government-appointed committees, politicians, and UN human rights bodies have also criticized the law.

Hundreds of thousands of Kashmiris – many of them Hindu, known as Pandits – were displaced from the Muslim-majority Kashmir Valley after a spate of attacks by militant groups in 1989-90. The government has failed to provide for their safe return. Kashmiri Pandits employed in government jobs in Kashmir Valley have been on an indefinite strike, demanding relocation, after gunmen shot Rahul Bhat, a Kashmiri Pandit government employee, in his office in the Budgam district in May 2022.

The Indian government claims that it has provided government jobs for 5,502 Kashmiri Pandits in the Kashmir Valley, and that no Kashmiri Pandit has migrated from this region since 2019. However, on June 1, the Kashmiri Pandit Sangharsh Samiti, a group representing the minority population in the region, wrote to the region’s chief justice raising concerns for their safety, accusing the government of preventing them from relocating, and seeking high court intervention, the statement said.

Instead of addressing human rights concerns, Indian officials have sought to project the appearance of progress, Human Rights Watch said.

“A year ago, Indian foreign minister Jai Shankar said government policies in Kashmir have led to real “democracy, development, good governance and empowerment.” In July, during a visit to Kashmir, the home minister said that “a new era was established in Kashmir,” and that it was on the “path of peace and development.”

“The security forces’ raids and targeted attacks by militants in Kashmir are grim reminders of the unending cycle of violence linked to repressive Indian government policies and the failure to bring abusive forces to account,” Ganguly said. “The Indian authorities should ensure justice for security force abuses and end policies that violate the fundamental rights of Kashmiri people.”