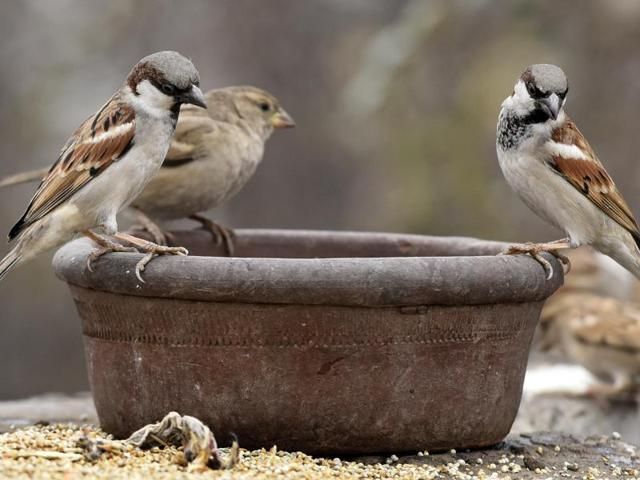 I am happy as well as astonished while listening the chirping of house sparrow early morning, right on my window, since many weeks. Its time is perfect. Its melody begins exactly when people are called for prayers from the loudspeakers of my nearest mosques. I have now stopped updating my wake up alarm in the mobile. Sparrow’s melody seems enough to remind me of my spiritual obligation, every morning. Sometimes, I become ashamed when indolence overcomes me leading to delay in my duty to God, whereas the sparrow is very attentive in this regard.

Sparrow is a small house bird, symbiotically living with man for about 10,000 years. However, urbanization and changes in life style in recent times have threatened its very existence. A UN body, IUCN, included it among endangered species in 2002 and declared 22 March as International Sparrow Day.

Like in many other cities, house sparrow has become almost invisible in Delhi for quite many years. Its existence was so much so threatened in the national capital of India that it was declared the state bird and mascot of Delhi on 14 August 2012. Besides Delhi, sparrow enjoys the state-bird status in Bihar.

Mohammed Dilawar of Nature Forever Society, declared as one of the Times 30 “Heroes of Environment” in 2008, partnered with the official campaign ‘Rising of the Sparrow’ launched by the then chief minister of Delhi Sheila Dixit on the day. However, nothing significant could be achieved so far.

Shivani Singh wrote in 2017, “Ever since it was declared the state bird in 2012, nothing has been done to bolster the depleting sparrow population in Delhi. Not even a study to tell us where and how their habitats are disappearing.” She laments, “Our modern urban living spared no space for the bird that has always been part of our household.”

Cutting of trees, absence of ventilators in houses, non availability of worms for feeding nestling amidst concrete structures, radiation of mobile towers, high-mast lights in Delhi’s public places and roads, glass panels on high buildings where bewildered sparrow strike and die, noise pollution, use of insecticides in houses and green swathes, etc. are some major reasons for the dwindling population of sparrow in the national capital.

Though sparrows still enjoy the spaces of Lodhi Garden, Sanjay Van and biodiversity parks in and around Delhi, these human friends are fast decreasing from residential areas of the metropolitan.

Fayaz Khudsar, scientist incharge at Yamuna Biodiversity Park, is of the opinion that today’s urban constructions are not sparrow-friendly. Dr Surya Prakash of JNU suggests from certain experiments in Shankar Vihar colony that provisions of feeders and nest boxes will be highly useful for bringing back sparrow population to Delhi.

In a way, the dimishing sparrow visibility is an indicator of perilous environmental health challenge to human population too, an alarming bell for Delhites to wake up and work for a better niche for themselves and other living beings around.

When I discussed my amusement on hearing sparrow’s song early morning with my family a few weeks back, I was informed by my daughter-in-law that she had seen a nest of the little bird amidst scrape bamboos laying on the roof top. She also let me know that she put a water pot there for thirsty birds. I immediately rushed and saw the developments myself.

To my dismay, it was an abandoned nest! Our dear sparrow brooded its nestling, reared them there and had left. However, it struck to me, how little the bird desires from us for giving in return its perennial company!

While writing this article, I again ascended to my terrace. Trying to have a snap of the left out nest, I saw a female bird hurried out of it and flew away, being threatened due to my presence so close.

However, I became delighted that a new set of nestling was about to join our household, may be for a brief time.

(Author is a well known environmentalist and activist of Delhi.)