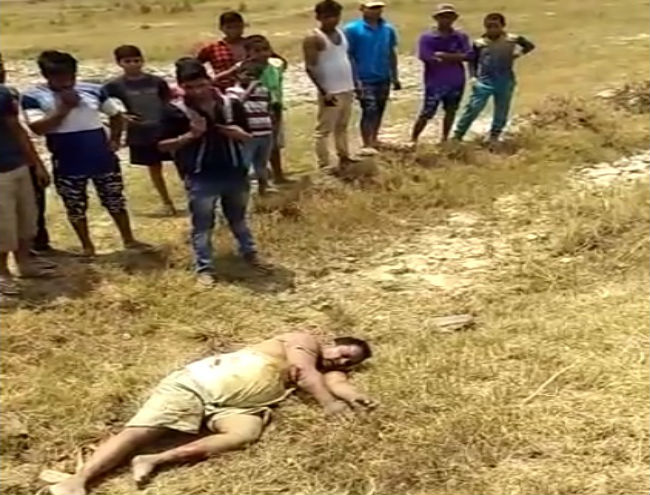 This is what India has become: One more pitiless lynching. This time of two older men, a petty goat trader and a marginal farmer in a village in Hapur, Uttar Pradesh, a two-hour drive from the national capital. The same frenzied gratuitous cruelty of the mob, the passivity of the bystander, the triumphant video-taping of the crime broadcast through the internet, the cynical silence of the country’s leadership, the cover-up by the police.

A team of the Karwa- e-Mohabbat visited the families of the victims a week after the crime. The distraught wives of the two men, their children, brothers, sisters, neighbours had watched many times the terrifying video of the lynching. The story of what exactly happened was still hazy. What we were able to piece together was that Qasim went to the neighbouring, predominantly Hindu, village, after a phone call to pursue his trade, probably to buy a goat.

There, reportedly, an announcement was made on the temple loudspeaker claiming that he was a cow-killer, urging people to gather. No one had ever troubled him before, so he was walking unsuspectingly through Samiuddin’s fields to reach the village. A group of men caught both Qasim and Samiuddin, dragged them to an enclosed compound and beat them ruthlessly. Later they hauled them out into the open fields.

There a large crowd had gathered, many of them boys in their teens. Here they assaulted the two men with anything they could find — iron rods, sticks, knives, daggers, screw-drivers, even pens. Through all of this, they taunted and humiliated the two men. They pulled Samiuddin’s beard and stripped Qasim to his underwear. Some in the crowd filmed the last stages of the lynching. “There was not a part of his body which was not bloodied and torn,” Qasim’s family grieved when we met them in their tiny rented one-room tenement in the village Sadikpur.

We met the family of the other victim, Samiuddin, during their anxious vigil outside the ICU ward in a private hospital in Hapur. They listed mournfully the litany of his wounds: Fractures in his legs and hands, two broken ribs, damaged lungs and kidneys, ears cut, head smashed.

Qasim’s family is visibly impoverished. In his forties, Qasim earned a tenuous livelihood buying and selling goats. Overweight and increasingly unsteady on his feet, he would walk from village to village offering to buy kid goats. These his wife would raise and fatten for sale in their tiny one-room home, crowded with their children and the clutter of their worldly belongings.

The conversations in the video suggest that some policepersons were standing by during the lynching. A later video shows the policemen dragging the two critically wounded men face down. Qasim was declared dead at the hospital while Samiuddin was admitted to the ICU. The mob grievously injured the two men; however, the act of the policemen, of dragging them along the ground, took Qasim’s life. The policemen were merely transferred, not even suspended let alone charged with abetting murder. According to the police complaint, the men were attacked in road rage.

To make matters worse, when we visited the crime site in village Baghera, we found the police had done nothing to cordon it off to preserve evidence. Blood stains were visible in the field. A pair of broken red rubber slippers lay there. Curious villagers and a medley of journalists and fact-finders walked over these. This deliberate destruction of evidence is another recurring pattern in India lynch crimes.

Each of these deaths have destroyed families. Samiuddin’s family is paying for his ICU treatment in a private hospital with no support from the government. No senior official has met either family. Qasim’s widow sat shrouded in a veil in the corner of their single-room tenement. Their teenage daughters spoke of their loving father: “He had no money, but still wanted us to enjoy the Eid. So he did not pay this month’s rent and borrowed a thousand rupees for our Eid feast.” Their hands still bore the colour of henna.

What kind of country have we allowed ourselves to become? Many countries display trends similar to India, of rising hatred and bigotry cloaked in aggressive, militant nationalism, spurred by popular authoritarian leaders. Yet, India is singular for its mounting wave of public lynching. In a great many countries, governments and dominating majority populations have become openly hostile to minorities — Muslims, religious or ethnic minorities, indigenous populations, Romas, people of colour, immigrants or sexual minorities. But nowhere except in India has this resulted in mobs feeling encouraged and empowered to regularly lynch people of minority identities, and further to film these and proudly post the videos on social media.

India has transmuted into a country where we elect leaders who display no compassion, and even less remorse for each hate crime, where leaders and officials side with the killers against the victims. It is a society in which children and young people hate, stone and beat other human beings to death only because they are of another religion or caste, and lawyers angrily agitate if a killer is arrested.

Yet, among the rest of us, there is a wearying even of outrage, the sapping of empathy. Lynching is now a normal, even essential, emblem of our public life. It is the way we have taught our young people to discipline and subjugate the hated other in our midst. Is this what we choose to become — a republic of hate?