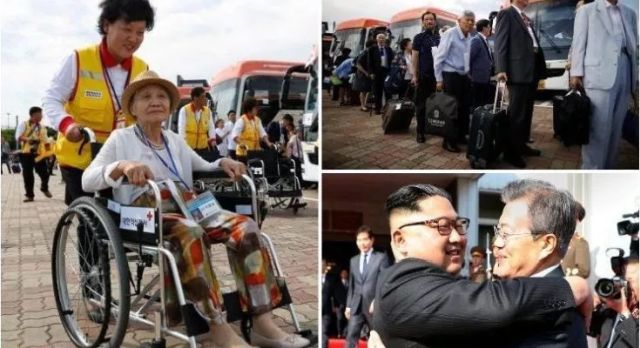 Seoul : A group of South Korean families separated by the 1950-53 Korean War from relatives living in the North left on Monday for Mount Kumgang for rare reunions with their long-lost relatives.

Over half of South Koreans on the waiting list for reunions are in their 80s or older. The eldest South Korean participant for the first session is a 101-year-old Baek Sung-gyu who will meet his daughter-in-law and granddaughter from North Korea.

Their meetings, arranged after decades of separation, will be painfully short lasting only 11 hours. They will meet in groups and private gatherings during the three-day reunions.

It could be the only chance for the separated families to meet face-to-face, Xinhua news agency reported.

The families from South Korean gathered on Sunday at Sokcho to register for the reunion, and get their health checked among other preparations.

The first session of reunions will last from Monday to Wednesday, and will be attended by 89 South Koreans who have never seen their relatives from the North since the Korean War ended with armistice. A total of 108 others are accompanying the family members.

The second session of three-day reunions, involving 83 North Korean family members will begin later this week at the same venue.

The two Koreas agreed in June to hold the reunions as part of efforts to implement the Panmunjom Declaration.

The declaration was signed by South Korean President Moon Jae-in and top North Korean leader Kim Jong-un after their first summit on April 27 at the border village of Panmunjom to defuse military tensions and increase exchanges between the sides.

It will be the first reunion of the war-separated families in nearly three years. The last one was held in October 2015.