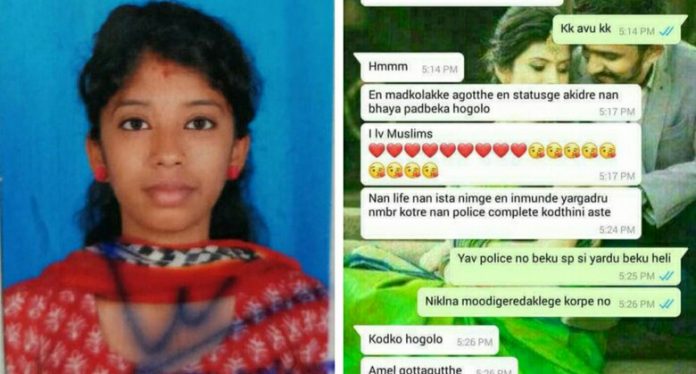 New Delhi: A 20-year-old was driven to suicide on January 6 for writing “I love Muslims” on WhatsApp while chatting du male friend at Mudigere town near Chikkamagaluru in Karnataka. She took the extreme step after being accused of “being friendly with Muslims”.

Dhanyashree, a B.Com student, was found hanging in her room. The woman was chatting with her friend, Santhosh, on Friday when the conversation veered towards the futility of fighting over caste and religion. In a reply to a question posed by him, she had replied “I love Muslims”.

According to the police, she begins her suicide note by asking, “If you Hindu boys do such an injustice to a Hindu girl like me, then where will I go for justice? I am not in love with any Muslim boy, not going out with any Muslim boy. Because of your unnecessary harassment, you have tarnished my reputation and name. Whatever has happened to me should not happen to any other girl.”

Being her usual feisty self in a WhatsApp, Dhanya had replied that she “loved Muslims”, in response to a question posed by the prime accused Santhosh, a lift mechanic.

Santhosh, a native of Badagakajekar village in Bantwal taluk got infuriated after seeing Dhanya’s pro-Muslim messages and warned her.

Dhayana does not back down when Santhosh threatened to circulate screenshots of the conversation (in Tulu) to local Bajrang Dal and VHP members.

Santhosh assumed that Dhayana was befriending Muslims and warned her. He shared the screenshots with Bajrang Dal and pro-Hindu groups that went viral in no time thereby causing mental trauma. 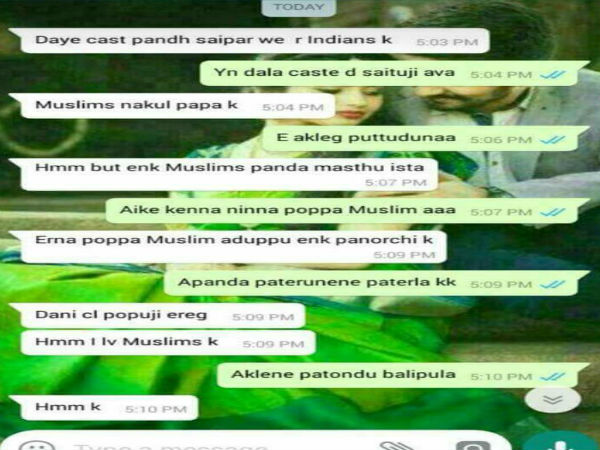 Later, the pro-Hindu activists including the BJP youth wing leader Anilraj and others including Bajrang Dal activists visited her house and picked up a quarrel in abusive language with the girl and her mother.

Unable to take the harassment, Dhanya hanged herself at her residence on January 6 of Saturday afternoon leaving behind a death note.

Dhanya’s mother Saraswathi Suvarna, a tailor in her complaint blamed the members of right-wing groups for harassing and forcing her to take this extreme step by claiming that “she loved” Muslims.

On Thursday, team of police officers led by Mudigere PSI M Rafeek picked up the absconded Santhosh from Bengaluru.