New Delhi, August 4: The Rihai Manch, which has now become a rallying point for those seeking justice with Khalid Mujahid, on Monday hosted a grand Iftar on the completion of 75th day of the indefinite dharna which it started on 20th May, two days after the custodial death of Khalid Mujahid.

Khalid Mujahid was a resident of Jaunpur in Uttar Pradesh. He was picked in Dec. 2007 for the court blasts in November same year in the state. The government-appointed RD Nimesh Commission had enquired into his arrest and found it as illegal and fake. Following the enquiry, the family and human rights activists demanded release of Khalid Mujahid. But on 18th May he died in mysterious circumstances in police van when he was being brought from Faizabad court to Lucknow jail. Within hours after the death, his family lodged FIR naming over three dozen police officers for the false arrest and custodial killing but even two and half months have passed the state government has not taken any action against the accused. 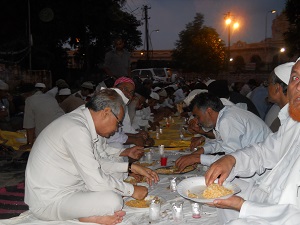 The Iftar of Rihai Manch today was attended by hundreds of people from different communities. They prayed for justice with the innocents languishing in jails in false cases.