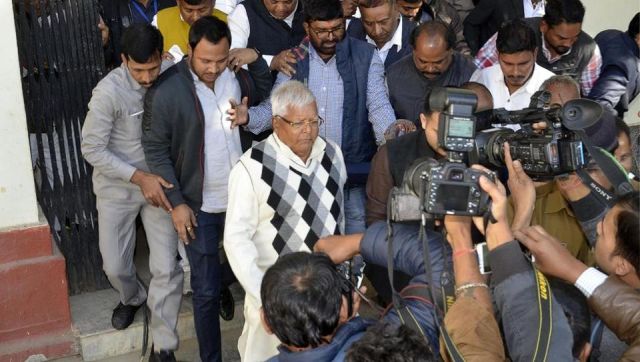 New Delhi : The Rashtriya Janata Dal (RJD) on Saturday blamed “dirty politics” and the “caged parrot” for the conviction of party chief Lalu Prasad in the fodder scam case.

Speaking to reporters, RJD leader Manoj Jha said the “caged parrot” (as Supreme Court once referred to the Central Bureau of Investigation, or CBI) had been unleashed on political rivals who did not bow before the Bharatiya Janata Party (BJP).

He emphasised that this decision would not weaken the RJD workers’ resolve to fight their rivals politically.

Targeting the BJP, Jha said that 11, Ashok Road (the BJP headquarters in Delhi) “is a washing machine that washes all taints of a person who goes there and bows before them”.

“This conviction by a lower CBI court can possibly get quashed in the high court. We have seen many such cases. But our concern is the politics behind it, the politics that tries to subdue you through such means because it cannot counter you politically,” Jha said.

“What do we do of the caged parrot that does not see a 16,000 times spike in a person’s income because that person is influential. Two people are running the country and are shattering traditions and demolishing institutions,” he added.

The “16,000 times spike in a person’s income” comment is a reference to the increase in turnover of a company headed by BJP President Amit Shah’s son, after the party came to power.

He said that the strings of the CBI were being pulled from the BJP headquarters.

“Let me give an example. The CBI had filed a disproportionate assets case against Lalu Prasad. But he came out clean and won the case in the Supreme Court. One of the judges had observed that the CBI was evidently biased against Lalu Yadav.”

Pointing to the Rs 880-crore Srijan scam, without naming anyone, Jha said a person allegedly involved in the scam was a Chief Minister.

“But ‘Saheb’ and the ‘caged parrot’ would not look at it, because the Chief Minister has bowed before them and thus washed off all taints,” he said.

The Srijan scam refers to fraudulent transfer of huge government funds to the account of a Bhagalpur-based NGO called Srijan Mahila Sahyog Samiti between 2004 and 2014. The RJD has accused Bihar Chief Minister Nitish Kumar of being responsible for the scam.

“We have full faith in the judicial system and traditions of this country. But we know what kind of forces are incessantly trying to harass Lalu Prasad — a socialist ideology and the political power that refuses to bow before you. But the parrot will have to bow before the judicial process,” Jha said.