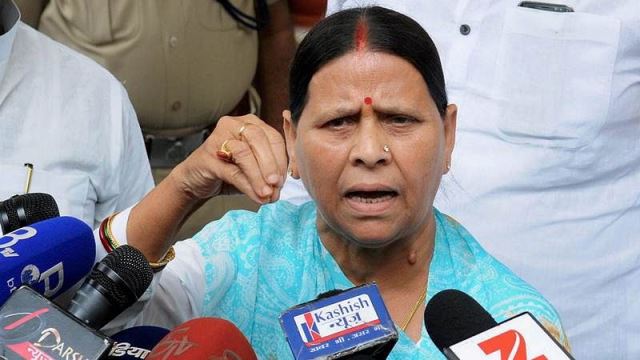 PATNA — Former Bihar Chief Minister and Rashtriya Janata Dal (RJD) leader Rabri Devi on Friday congratulated the people of Bihar on the beginning of 2021 and wished that the year is fruitful for both the state and the country.

On Friday, a large number of leaders and workers reached Rabri Devi’s residence and wished her happy New Year. While addressing the media, the former CM referred to the recent incident in Arunachal Pradesh where six Janata Dal United leaders joined the Bharatiya Janata Party (BJP) and said the BJP could try the same political trick in Bihar.

She opined in her own inimitable style, “BJP does its work internally, everybody comes to know of it only when they have completely done it.”

Asked about Nitish returning to the Opposition Grand Alliance, Rabri said the party leaders and MLAs would sit together and consider it.

Rabri said at present, the BJP is running the government and not Nitish Kumar, adding, that it is the BJP that took the decision on the recent transfers of Indian Administrative Service (IAS) and Indian Police Service (IPS) officers in the state.

The wife of Rashtriya Janata Dal (RJD) President Lalu Prasad said those criticising her son and Leader of Opposition in the Bihar Legislative Assembly, Tejashwi Yadav, moving out of Patna must focus on other important issues. She said whenever Tejashwi leaves Bihar, it is related to work. — IANS