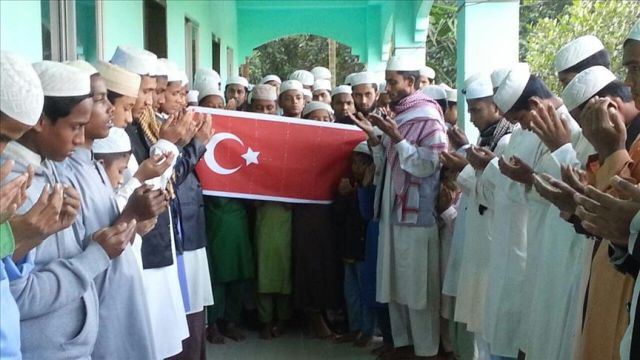 Istanbul: Rohingya orphans, who have fled violence in Myanmar to Bangladesh, prayed for Turkish soldiers, as an operation in northern Syria’s Afrin continues.

Turkey on Saturday launched Operation Olive Branch to remove the PYD/PKK and Daesh terrorists from Afrin.

The prayers were held at a school in a refugee camp in Bangladesh’s Cox’s Bazaar city, a teacher told Anadolu Agency.

With Turkish flags in their hands, the orphans prayed for the victory of the Turkish army.

Since Aug. 25, 2017, some 650,000 refugees, mostly children and women, fled Myanmar when Myanmar forces launched a crackdown on the minority Muslim community, according to the UN. At least 9,000 Rohingya were killed in Rakhine from Aug. 25 to Sept. 24, according to Doctors Without Borders.

According to the Turkish General Staff, the ongoing operation aims to establish security and stability along Turkey’s borders and the region as well as to protect Syrians from the oppression and cruelty of terrorists.

The operation is being carried out under the framework of Turkey’s rights based on international law, UN Security Council resolutions, its self-defense rights under the UN Charter, and respect for Syria’s territorial integrity, it said.

The military also said the “utmost importance” is being put on not harming civilians.

Afrin has been a major hideout for the PYD/PKK since July 2012 when the regime of Syria’s Bashar al-Assad left the city to the terror group without putting up a fight.