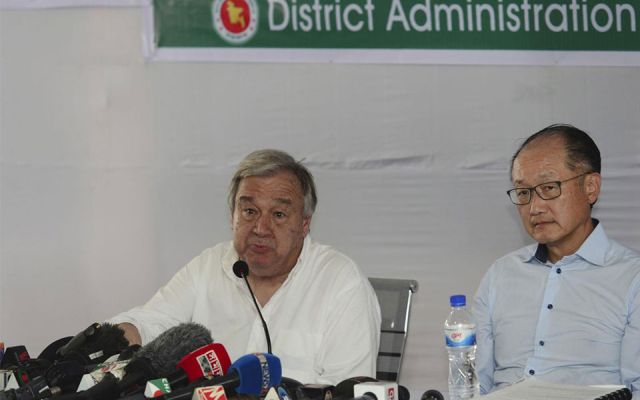 Kutupalong (Bangladesh) : Hundreds of Rohingyas on Monday called for support from the international community during a visit of UN Secretary General Antonio Guterres to refugee camps in Bangladesh, which host more than 915,000 members of the Muslim minority who have fled Myanmar.

Mud and heavy monsoon rains did not prevent hundreds of Rohingyas from leaving their huts with banners and chanting slogans as Guterres, who is on a two-day official visit to Bangladesh, visited the camps, Efe news reported.

“We want to return to Myanmar as dignified citizens, with security and our all rights,” Amir Ahmed, one of the demonstrators in the massive Kutupalong camp, told the news agency.

The camps in Bangladesh host some 915,000 Rohingyas, including around 700,000 who have sought refuge in the country since August 25, 2017 when the Myanmar military launched an offensive in retaliation to an attack on multiple government outposts by Rohingya rebels in the western state of Rakhine.

A Rohingya representative in Kutupalong, Mohammad Mohibulla, said they had 13 demands to deliver to Guterres, who was accompanied by World Bank president Jim Yong Kim.

Mohibulla, who is chairman of the Arakan Rohingya Society for Peace and Human Rights, said their requests included the need for those who committed “genocide” against members of their community in Myanmar to be tried and for compensation for human and material losses.

“We want the UN to deploy troops in an uninterrupted manner in Arakan (Rakhine), we want full citizenship under the name of ethnic Rohingya,” instead of identity cards announced by Myanmar in which they would be recognized only as “Bengali”, he said.

Myanmar authorities do not recognize the Rohingyas as a distinct ethnic group and instead consider them illegal Bangladeshi immigrants and deny them citizenship and other basic rights.

International pressure led Myanmar and Bangladesh to ink a deal on November 23 to repatriate the Rohingya refugees starting from January 23. However, seven months later, the formal repatriation process is yet to begin.