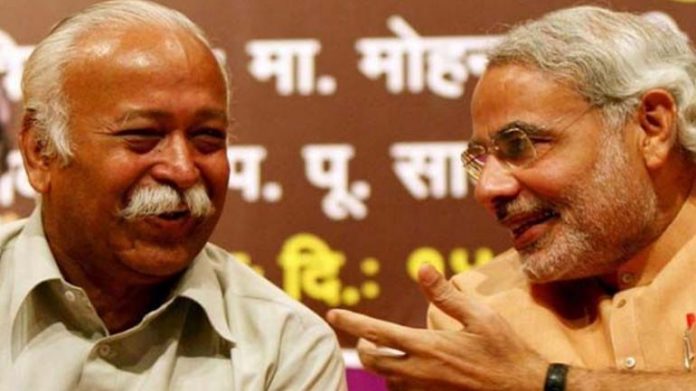 Lucknow: The Rashtriya Swayamsevak Sangh (RSS) is said to be “very angry and upset” over the growing tendency of BJP leaders to make uncalled for and controversial remarks that only serve to tarnish the party”s image.

Whether it is the Akash Vijayvargiya episode or the remarks of Sadhvi Pragya or the recent controversy over BJP MLA Rajesh Misra”s daughter, the Sangh is worried that such incidents are making the BJP lose its USP of being a “party with a difference”.

“The BJP was always known as a ”party with a difference” but some of the leaders are destroying the party”s image. The BJP leadership should now go beyond issuing warnings. Time has come to strict action against such MPs and MLAs.

“Our government at the Centre and in Uttar Pradesh have a very comfortable majority and a few numbers less will not make a difference,” said a senior RSS functionary.

“This one episode has undone our efforts at establishing ”samajik samrasta” social harmony and bringing Dalits into the Hindu mainstream.

“The MLA should have accepted the marriage and not projected an anti-Dalit stand. What will he do now that the High Court has confirmed the validity of the marriage?” he asked.

The new political conspiracy angle to the Bareilly marriage has further demolished the BJP”s image.

The RSS feels that if the party leadership had taken action on party leaders who have been making controversial statements, the trend would have been checked.

He said that the RSS, “which normally does not interfere in the working of the BJP”, will now take up the issue with the party leadership and suggest remedial measures before the situation goes out of control.

“The behaviour of some BJP leaders is against the philosophy of ”sanskar” (virtues), ”samrasta” (harmony) and ”samuhikta” (oneness) which the Sangh practices and preaches,” the functionary said.

The RSS is particularly upset with Ballia MLA Surendra Singh who now has a history of making objectionable statements.

From claiming that Muslims have 50 wives and 1,050 children, to calling unprintable names to West Bengal Chief Minister Mamata Banerjee and Congress General Secretary Priyanka Gandhi and then saying that the Bareilly couple”s marriage was driven by “lust” — Surendra Singh has said it all.

Chief Minister Yogi Adityanath and state chief Mahendra Nath Pandey have remained mute spectators to Singh”s statement and not even a word of warning has been issued to him.

Former MP Nepal Singh said that there was no need to grieve over the deaths of army personnel because “when they join the service, they know they are bound to die.”

BJP MP Sakshi Maharaj is another leader, who is known to kick up controversies with his statements.

He claimed that all madarasas are “nurseries for terrorists”, and then said that “we are ready to kill and get killed to protect cow mother”.

Sakshi Maharaj said that the Dadri lynching victim was given Rs 20 lakh because he happened to be a Muslim. He also claimed during elections that if the Modi government returns to power, there will be no more elections in the country.

“The anti-Muslim statements are a violation of the Modi government”s slogan of “Sabka Saath, Sabka Vikas, Sabka Vishwas” and also demolish the Prime Minister”s efforts to bring Muslims into the BJP fold,” the RSS functionary said.