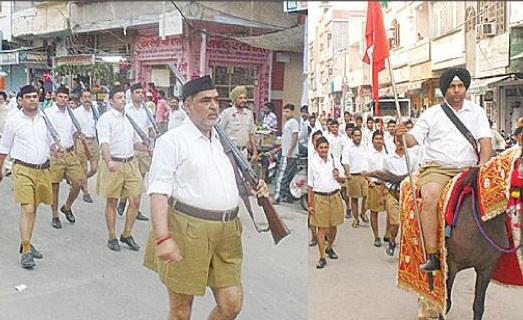 Use of Conspiracies for Terrorist Activities by the RSS

Like any other terrorist outfit RSS too indulges in conspiracies. The central publication house of the RSS, the Suruchi Prakashan, has published a book in Hindi, Param Vaibhav Ke Path Par (The Road to Glory) in 1997 giving details of more than 40 organizations created by the RSS for different tasks.[i] The above publication of the RSS shows how the organization is run in a clandestine manner. It runs like a well-organized mafia through its subsidiaries and satellites. There has always been a conscious attempt to create confusion about its different fronts which provide RSS with the opportunity to dissociate with any of these as per its convenience. For instance it used Hindu Jagaran Manch (HJM) for attacking Christians in late 1990s and when public opinion, media and Parliament seemed to turn against it, RSS denied any relation with HJM. When nefarious designs of Vishwa Hindu Parishad, Bajrang Dal and Dharam Sansad were exposed before the Nation, RSS announced that these were independent organizations.

It will be interesting to know that many of these organizations have been organized in a clandestine manner, a characteristic of a Fascist set-up. For instance while giving the details of Hindu Jagaran Manch (HJM), the book says,

“From the point of view of Hindu awakening this kind of forums (HJM) at present are active in 17 states with different names like ‘Hindu Manch’ in Delhi, ‘Hindu Munani’ in Tamilnadu, ‘Hinduekjut’ in Maharashtra. These are forums, not associations or organizations, that’s why it is not required to have membership, registration and elections.”[ii]

It is clear that this mode has been adopted to scrutiny by the law enforcing agencies and the government. Such an organizational mode provides an opportunity to RSS to disown any individual or organization. How it conspires can be known by the following disclosure in Param Vaibhav Ke Path Par about a case in Delhi immediately after Partition:

“Swayamsevaks had posed to have adopted Musalman religion in order to gain the confidence of Delhi Muslim League for knowing their conspiracies.”[iii]

What these swayamsevaks, impersonating as Muslims, on the eve of Independence were doing was made clear by none other than Dr. Rajendra Prasad who later became first President of the Indian Republic. In a letter to the first Home Minister of India, Sardar Patel, on 14 March 1948, Prasad wrote:

I am told that RSS people have a plan of creating trouble. They have got a number of men dressed as Muslims and looking like Muslims who are to create trouble with the Hindus by attacking them and thus inciting the Hindus. Similarly there will be some Hindus among them who will attack Muslims and thus incite Muslims. The result of this kind of trouble amongst the Hindus and Muslims will be to create a conflagration.[iv]

Sardar Patel, the first home minister of India was familiar with this nefarious character of the RSS. In a letter to the Prime Minister of India, Jawaharlal Nehru he admitted:

“In the case of secret organization like the RSS which has no records, registers, etc. securing of authentic information whether a particular individual is active worker or not is rendered a very difficult task.”[v]

With these facts available in the official archives of the RSS, it is not difficult to realize that RSS as a terrorist outfit represents the most lethal danger not only to the democratic-secular Indian polity but to the world peace and the ideal of co-existence. All those individuals and organizations which are concerned about these ideals and do not want another Holocaust must meet the challenge head-on.