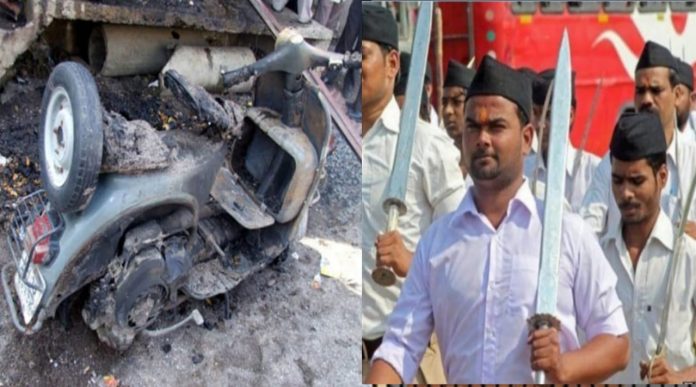 Yashwant Shinde filed an affidavit, on Tuesday, in the Nanded court that he was a witness to the bomb blast training. The RSS functionary, in the affidavit, said that RSS is detonating all the bombs in India.

“In 1999, while the applicant was in Maharashtra, Indresh Kumar told him to get hold of some boys having fighting spirit and take them to Jammu where they would be trained in the use of modern weapons. For selecting the boys for the purpose there was a state-level meeting of VHP in Thane (Maharashtra). In that meeting the applicant got introduce to one Himanshu Panse of Nanded. That time Himanshu Panse was the full time worker of the VHP in Goa. He and his 7 friends were selected for training. The applicant took Himanshu and his 7 friends to Jammu. There they received training in modern weaponry from the Indian Army jawans,” the affidavit reads.

“These two persons informed the applicant that a training camp in bomb-making was going to be organized shortly and thereafter, there was a plan to cause bomb blasts throughout the country. They put forth the proposal that he should take responsibility for carrying out maximum bomb-blasts in various parts in the country. He was shocked but did not show on his face and asked them in a lighter vein whether it was a preparation for 2004 Lok Sabha elections. They did not answer,” the affidavit further reads.

According to the affidavit, one Rakesh Dhawade used to bring him to the place of training and take him back. He was the same Dhawade who was later arrested in Malegaon 2008 blast case.

“After the training the organizers took the trainees in a vehicle to a secluded forest area for testing the bombs by carrying out rehearsal of blasts. The trainees would dig a small pit, put the bomb with timer in it, cover it with soil & big boulders and detonate the bomb. Their tests were successful. There were big blasts & the boulders were thrown away to long distances,” the affidavit reads.

According to the affidavit, the applicant went to Nanded several times and tried to convince
Himanshu Panse not to indulge in bomb-blasts, as it was a Sangh Pariwar’s conspiracy to ensure BJP’s victory in the election.

“The RSS and BJP leaders had intentionally included the applicant in this project as they knew that if he wanted he could do blasts throughout the country. He had contact with ‘Garjana’ in Maharashtra, with ‘Hindu Yuva Chhatra Parishad’ in Jammu-Kashmir, Punjab, Haryana, Assam and UP, with ‘Shri Ram Sena’ in Karnataka and with senior leaders like Tapan Ghosh in West Bengal,” read the affidavit.

“If he wanted he could have caused 500-600 bomb blasts. But as he knew the ulterior motives of the leaders, he scuttled their plan and did not allow it to succeed. He also convinced Tapan Ghosh about the ill-motive of the leaders. Tapan Ghosh agreed with him and distanced himself from these nefarious activities. Likewise Pramod Mutalik of Shri Ram Sena of Karnataka who was close to Tapan Ghosh, also did not do anything. Thus, the applicant sabotaged the destructive plan of RSS and BJP and saved the lives of many innocent Hindus, Muslims and Christians,” the affidavit states.

“As the RSS and VHP’s plan of causing blasts throughout the country was not as successful as was expected the BJP was not politically benefitted. Consequently in the 2004 elections Congress party got the majority. The persons like Milind Parande who were the main
conspirators were scared and went underground, but they continued hatching conspiracies secretly. By remaining underground they carried out many bomb-blasts across the country and with the help of biased police and one sided media blamed them on Muslims. That helped them in 2014 Loksabha elections,” the affidavit reads.

According to the affidavit, In 2014 the BJP captured power at the Centre and Narendra Modi became the Prime Minister. This resulted into sudden activation of all the underground destructive forces belonging Vishwa Hindu Parishad and Rashtriya Svayamsevak Sangh (RSS).

“The applicant could see that the same people were behind terrorist anti-constitutional activities at West Bengal, Jammu and Kashmir, Uttar Pradesh, etc. and were deliberately trying to create distrustful and fearful atmosphere throughout the country.”

In the affidavit, the applicant has raised concerns as to why Rashtriya Svayamsevak Sangh (RSS) and Vishwa Hindu Parishad (VHP) workers are being used for the benefit of BJP.

“The applicant has a firm belief that Hindu religion is a very noble religion. Hindus, in general, are not of terrorist tendencies but some Hindu organizations like RSS, VHP, Bajrang Dal are definitely engaged in terrorist activities for the political gain of BJP,” the affidavit reads.

According to the affidavit, the applicant is an important witness in this case, as he had attended the terror training camp at Sinhagad alongwith the accused involved in this case.

“Moreover, as far as the applicant knows, the main conspirators in this case viz. 1) Milind Parande, 2) Rakesh Dhawade, who had been the main organizers of the training camp at Sinhgad near Pune and 3) Ravi Dev (Mithun Chakravarty) who imparted training to the accused in bomb making, have not been arrested and made accused in this case.”

According to the affidavit, Milind Parande is presently ‘Kendriya Sanghatak’ (National Organizer) of VHP. He sits in the VHP’s main office at R.K. Puram, New Delhi. Rakesh Dhawade is from Pune. He was arrested in Malegaon 2008 blast case and in some other blast cases. Presently he is on bail.

Ravi Dev (Mithun Chakravarty) resides in Haridwar and his mobile number is 9411786614.

In the affidavit, the applicant states that the three persons mentioned are the main conspirators in the Nanded blast case of 2006.

“The applicant requests that they be made accused in this case and be tried.” the affidavit said.