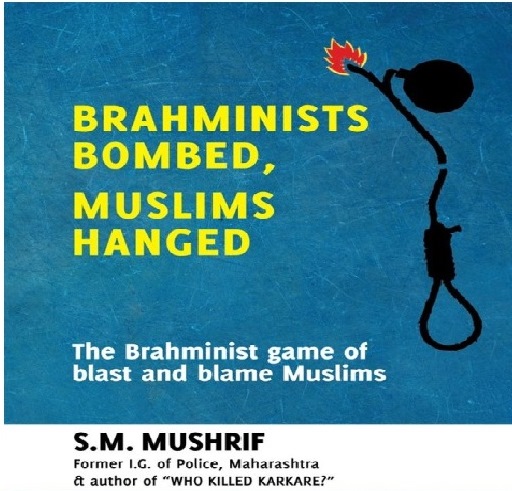 New Delhi: Former Maharashtra Inspector General of Police, S. M. Mushrif has shown in his just published book, Brahmanists Bombed, Muslims Hanged with irrefutable proofs that bomb blasts since 2002 were the handiwork of saffron terrorists but colluding agencies picked up Muslims, fabricated cases against them and threw them into jails.

Mushrif has shown in his just published book that RSS, Abhinav Bharat, Bajrang Dal and Jai Vande Matram etc. executed umpteen terror attacks but government agencies like Intelligence Bureau, NIA and ATS, with the help of people in government and saffron sympathisers in the media, erased proofs and implicated innocent Muslims in these cases. Media propaganda and prosecution at times succeeded in hoodwinking judges also.

With his path-breaking books like Who Killed Karkare? and 26/11: Why Judiciary Also Failed, Mushrif has exposed the terror fiction in this country. Governments and agencies have preferred to remain silent about these books.

Mushrif has demanded in this new book that a high judicial committee should be set up to independently probe all terror cases in the country. He believes that an independent probe will show that saffron terrorists exploded bombs but their friends in the media and agencies propagated that these are Muslim reactions to the Babri demolition and Gujarat 2002 riots. Mushrif holds Intelligence Bureau, known for its traditional anti-Muslim stance, as the main culprit in this issue.

Mushrif has shown in this new book that agencies covered up important proofs, did not investigate vital clues and failed to present important eyewitnesses in courts.

Courts acquitted some of the victims after they spent long years in jails but they received no compensation and those who framed and criminated them were never held to account.

Mushrif has studied in this book some bomb blast cases like the serial blasts in Mumbai trains, German Bakery, Aurangabad Arms Haul, the explosions in Hyderabad’s Dilsukhnagar, the Muhammadiya Mosque blast in Parbhani and the Makkah Masjid blast.

The book has been brought out by the well-known Delhi publisher, Pharos Media, which has earlier published numerous titles which exposed the false terror narrative in the country. The book will soon be available in Urdu and Hindi also. The first important book in this series, Who Killed Karkare?, is now available in eight Indian languages. These books for the first time gave courage to the victims to come out and speak. Very soon, Pharos Media will publish a documentary work on lynchings, offering a detailed analysis and accounts of around 300 lynching cases under Modi sarkar.