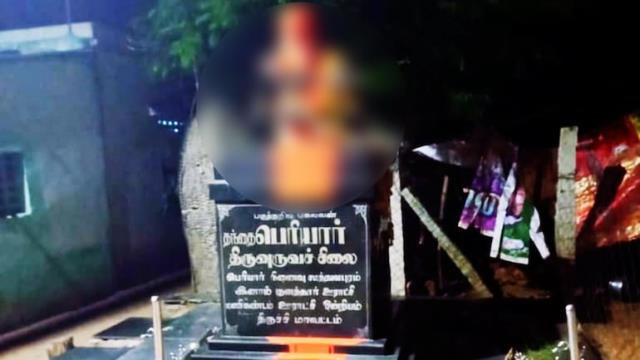 A statue of late social activist Periyar EV Ramasamy was vandalised, painted with saffron colour and garlanded with slippers. The incident took place in Trichy district in Tamil Nadu. The development drew strong responses from politicians in the state.

Police said the vandalism was discovered this morning at Samathuvapuram Colony in Inamkulathur locality. A slipper was strewn near the statue. Police said a case has been registered against unidentified persons.

DMK chief M K Stalin slammed the incident, the second such one in Tamil Nadu in recent months. A statue of the rationalist leader was found daubed in saffron paint in Coimbatore recently.

Locals blocked traffic for some time on the Dindigul highway, protesting against the vandalism and dispersed after police assured them that action would be taken.

DMK MP Kanimozhi lashed out at the BJP over Periyar statue vandalism. She said in a tweet, “Saffron paint has been poured over Periyar statue and it has been desecrated. On Periyar’s birthday, BJP state president L Murugan said that they have no hesitation in acknowledging the efforts taken by Periyar with respect to social justice. Is this is the respect they wanted to show? Is Periyar the only response for the questions over NEET, NEP and farmers agitation?”