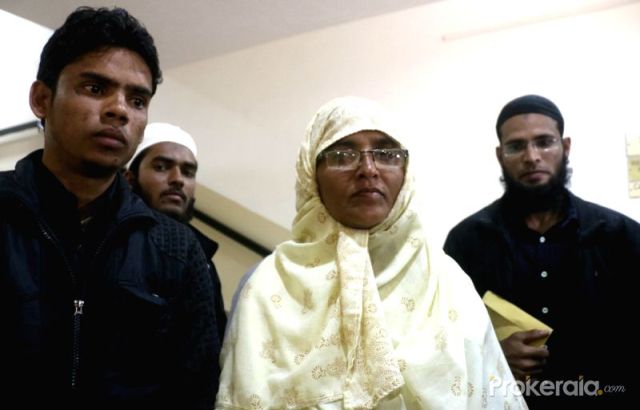 New Delhi : The Sahitya Akademi Awards 2017 were given away to writers from 23 languages here on Monday evening.

However, as a mark of protest against the murder of Haryana teenager Junaid Khan, who was killed in a train last June while returning home after Eid shopping, Malayalam writer K.P.Ramanunni gave away the award to his mother after taking Rs 3 from the total prize money of Rs 1 lakh.

Ramanunni said that the book for which he won the award is about communal harmony and said that Junaid was killed for no reason.

The family of Tamil poet Inquilab, awarded posthumously, who had earlier announced their refusal to accept the award also didn’t attend the award ceremony.

The award in Dogri went to Shiv Mehta for “Banna”, in English to Mamang Dai for her book “The Black Hill”, and in Gujarati to Urmi Ghanshyam Desai for her “Gujarati Vyakarana na Baso Varsha”.

The award in Hindi went to Ramesh Kuntal Megh for “Vishw Mithak, Sarit Sagar”, in Kannada to T.P. Ashoka for “Kathana Bharathi” in Kashmiri to Autar Krishen Rahbar for his “Yeli Parda Woth” and in Konkani to Gajanan Raghunath Jog for “Khand Ani Her Katha”.

The award in Odia went to Gayatri Saraf for “Etavatira Shilpi”, in Punjabi to Nachhatar for “Slow Down”, in Rajasthani to Neeraj Daiya for “Bina Hasalpai”, in Sanskrit to Niranjan Mishra for his “Gangaputravadanam”, in Santhali to Bhujanga Tudu for his book “Tahenan Tangi Re”, and in Sindhi to Jagdish Lachhani for his “Aachhende Laja Maraan”.

Sahitya Akademi President Chandrashekhar Kambar presented the winners with a citation, a shawl and a cheque of Rs 1 lakh.