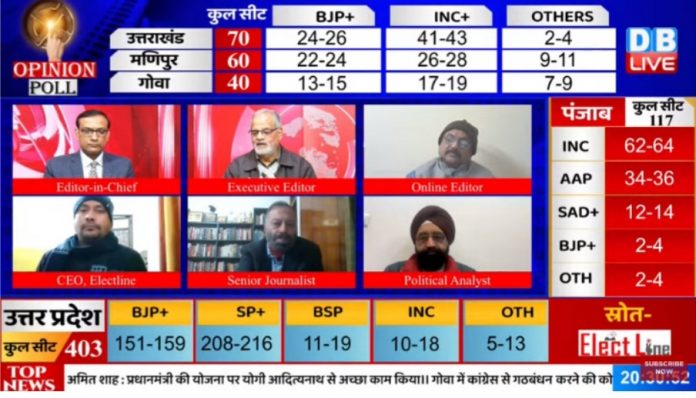 The political situation in UP, since the dates of polls have been announced, as understood is on the boil. The polling hasn’t started as yet, and therefore, in order to tap the mood of the voters, there are numerous surveys on the horizon, with most of the mainstream news channels, as understood, busy with ‘giving an edge’ to Ajay Singh Bisht -the BJP CM of UP. But, in all this melee, there has also been a very objective and non-partisan Opinion Poll, undertaken by DBLive, aired on January 22, at 5 pm, which says that Samajwadi Party (SP)led by Akhilesh Yadav, and its alliance, is clearly headed for a majority and BJP is all set to sit in Opposition. Now it has given a total tally to SP 208-216/403. AS Bisht is popularly known as Yogi Adityanath.

What would also may be mentioned here is that this latest DBLive survey was done after BJP Cabinet Ministers like Swami Prasad Maurya etc, its other ministers and MLAs, have deserted BJP and joined the SP.  DPLive Opinion Poll has been engaged into poll surveys since long, and makes it available in the last phase on every month.  In its November 26, 2021 survey it gave SP 203 seats, on December 26, 2021 it gave a majority tally to SP with 211 seats and now 208-16 seats. The majority magic figure in UP is 202.

What can be read through the survey is that BJP is set to loose around 50%  of its seats as  in 2017 BJP’s alliance had notched-up 325 seats, but right now what plagues BJP is a steep decline in its popularity. The currents are enough to give palpitations to BJP and its leadership. In fact BJP leadership has made it quite clear that even if for example BJP attains power there won’t be AS Bisht as a CM again, as many of its leaders have already spoken disparagingly against Yogi Adityanath,  and in favour of AK Sharma, a retired Brahmin IAS, as the next BJP CM candidate.

Not surprisingly, therefore, if not alarming, is what is coming out from the News24 survey, the otherwise mainstream news channel, which claims, that AS Bisht himself is on a shaky ground. The anger and disappointment which people has had with AS Bisht, is now getting vocal, as that a channel like News24 has been forced to reflect the public’s mood. It is also to be considered that a new political angle has got developed since Chandrashekar Azad has announced to fight against AS Bisht, from his home town Gorakhpur. Chandrashekhar Azad is the President of Azad Samaj Party and is slated to get the support of SP.

Will it be believable that out of around 2,62,000 who voted on this survey, until the writing of this piece, has conveyed that the majority thinks that Chandrashekhar Azad is to win! As many as  52% have said that victory would go to Chandrashekhar Azad, and also that, 35 % have voted that Azad would even forfeit his deposit, while 12% claim that it will be a tough fight. How would be it is CM himself looses the elections and that too from right inside his den?

It may also be necessary to add that AS Bisht had taken to fight from his home turf after he discarded the offers to fight from Mathura or even Ayodhya-the traditional seats of BJP where BJP has always played its odious communal ideology card. AS Bisht could not summon his courage for Mathura/Ayodhya and had to recline for where he has been a MP too, and yet, owing to this survey, it can well as construed that AS Bisht, perhaps, is on the lowest ebb of his popularity.  It is not to be a roller-coaster ride for AS Bisht, as he is expected to ruffle-feathers against an ideology, intrinsically based on socialism and secularism espouced by the expedient and pragmatic incumbent face i.e. Akhilesh Yadav- as the next CM.

BJP had been facing an uphill task  from prior to the launch of virtual rallies , due to the spread of Corona -Virus, or else vacant seats, hooting, BJP MLAs manhandled or forced to flee etc were the only scenes, and therefore, now the social-media has become the only reflection-mode for summing the electoral mood of the people, hence, it is coming out that AS Bisht is to get drubbed in his home constituency, which was quite unimaginable until not far before, as AS Bisht always exuded a larger than life role in UP politics, but the bubble seem to get tripped.

The stunning point is that the same fate is what seem to be in-waiting for BJP in Uttarakhand too where 24-26/70 for BJP are expected and 41-43 for Congress as per DBLive. It is really, no less shameful, that even the BJP CM Trivendra Singh Rawat has refused to contest elections! In Manipur BJP is to get 24/60 while Congress is into for 26-28.  In Goa BJP is slated for 15/40 while Congress for 19 seats. Punjab is all set for a repeat of Congress government with 62-64/117 seats, despite Captain Amrinder Singh hobnobbing with BJP. This is solely for the fact, that as many as around 700 farmers died, mostly from Punjab, in the protests against BJP passing-off the three anti-farmers laws. BJP in Punjab is expected for 4 seats only and AAP is also to make inroads with around 34-36 seats.

It is also a fact that when the political wind blows, then, the winner gets to win more seats, and likewise, happens in the opposite as  the runner ends-up loosing more seats, hence, even if News24 survey may be categorized as euphemistic, it does however shows that  a certain ‘reservation from people’ against AS Bisht can easily be felt. The objectivity and credibility of DPLive, however, falls into another category, where there is no rhetoric as such. How and what comes out in the battle of 2022, particularly when Imran Masood, a powerful Muslim face in Western UP in back in SP, and also that Muhammed Azam Khan, has moved to Supreme Court for his interim bail, as he has been stranded inside jail, as a worst political vendetta by BJP, since February 2020, is also yet to be seen.

Therefore, UP will need to wait until March 10.

You protest against ‘Modi-Yogi’ and ‘invite being shot’ The countdown to ‘BJP ouster’ has begun!

Modi addresses to ‘vacant-seats’ in Dehradun

Why Mayawati will not become Chief Minister of Uttar Pradesh