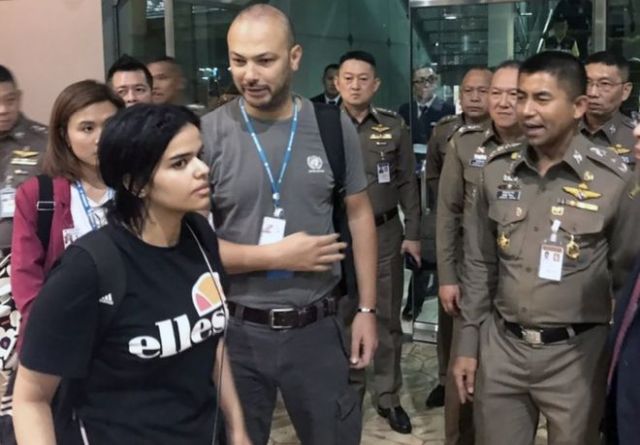 Bangkok : A Saudi woman who fled her family to avoid forced marriage and has been detained in Thailand on Tuesday sought asylum in Canada amid doubts about the status of her Australian visa.

Rahaf Mohammed al-Qunun, who arrived in Bangkok on January 5 on her way to Australia, was on the verge of being deported to Kuwait on Monday but she barricaded herself in a hotel room at the airport until she was granted a temporary stay in Thailand under the protection of the UN High Commissioner for Refugees, reports Efe news.

“I want Canada to give me asylum,” the 18-year-old tweeted, after doubts were raised over the status of her tourist visa for Australia.

The Deputy Asia Director of Human Rights Watch (HRW), Phil Robertson, told Efe that they were waiting for the official confirmation by Australian authorities that al-Qunun’s visa has been cancelled.

Robertson said it is common for countries to cancel visas when they find out that the applicant intends to stay in the country as in the case of al-Qunun.

The Saudi citizen managed to flee her family when they were on a trip to Kuwait, a Gulf country which does not require females to get the authorization of a male relative to leave the country.

Al-Qunun had intended to seek asylum in Australia once she reached there, after receiving alleged death threats from her family for refusing to get married and renouncing Islam.

She said an employee of the Kuwait Airways confiscated her passport and told her that at the request of the Saudi Arabian embassy she would be forced to board a flight back to Kuwait, where her relatives were waiting for her.

Al-Qunun began writing messages and posting videos about her ordeal on her recently opened Twitter account, which went viral and she had 83,700 followers by Tuesday.

Meanwhile, the Saudi Arabian embassy in Thailand denied in a statement that it had seized her passport or tried to detain her at the airport in order to deport her.

Thai authorities also maintain that al-Qunun tried to enter Thailand while on her way to Australia and was denied a visa due to which she was being deported to Kuwait, the country where she arrived from.

Al-Qunun and HRW have both denied this.