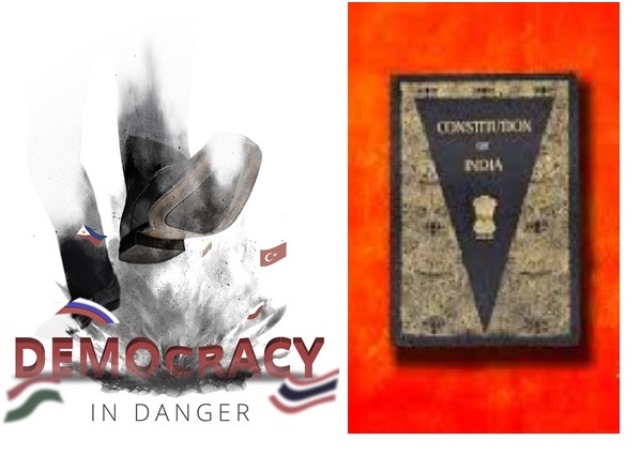 BJP and its cronies especially RSS, VHP, ABVP, and its more than 150 organisations are successful in dividing Indian voters in Hindu-Muslims, Mandir-Masjid, subduing/suppressing real issues of developments and of national importance and thus they have exploited the real gullible Indian voters to powers.

In Bhopal, leaders like Digvijay Singh whose credentials is par excellence and impeccable, has lost to a terror accused, what does this show and what kind of mindset Indian voters possess? It is not that Pragya Thakur has won, but India, Indian Constitution, and Indian Democracy has lost and got defeated by a terror accused who is going to be a lawmaker and there are many more such candidates who are going to sit in the Parliament. BJP and its allies like Shiv Sena, Bajrang Dal and their various organisations more than 150 in numbers are successful in dividing the community within a span of 5 years than the British who took 200 years to divide us and finally rule over us. Basically it is the fascist forces (Manuvadi) tampered with capitalists, racists and casteists to rule over downtrodden especially SC/ST and most deprived/marginalized ones perpetuating the Varna system.

The paid media or so called Godi media have played havoc and dirty games with democracy spreading rumors and baseless false information and other nonsense news among poor people especially SC/ST downtrodden and deprived people on caste and communal lines depicting/portraying Modi as champion of Nationalism and sole protector of Hinduism, Hindu culture and savior of nation.

All Governmental machineries- CBI, IB, EDI, NIA ECI and paramilitary forces have been used as personal tools and weapons to terrorize, harass and implicate opponent leaders and especially of regional parties or those leaders who were vocal to corrupt practices of BJP. The role of ECI is most dubious and full of suspicion and doubts. Its credentials have gone down and so low that common people has lost faith and confidence in it.

From the very day of inception of election process, it has been widely complained and voice has been raised that 20 lakhs EVMs are missing and their whereabouts are not known yet so far. Neither Central government nor ECI has given any cogent reply/explanation as to how and why these EVMs are missing. Even after election is over, EVM manipulation, replacements, and transportation is questioned. Many candidates who were contesting from Bihar, Uttar

Pradesh, West Bengal were on alert and vigilant and they did good job by protecting its manipulation, replacements and transportation. Whereas states like MP, Chhattisgarh, Rajasthan and Karnataka and other state leaders were complacent as in these states they were in power and their complacency have taken them to their political doomsday. They have not just bothered what Amit Shah and Company and BJP IT Cell are doing. Amit Shah and company did their best to jeopardise their political career.

The way things are moving on political front and taking shape it is very much evident that governments in MP, Rajasthan and Karnataka would be toppled soon. In West Bengal there will be Presidential Rule. This is going to happen sooner or later and it’s only a question of time.

One can imagine and visualize the future of our country when at present the law makers sitting in the Parliament are governed and guided by the ideology which runs contrary to the principles enshrined in our Constitution. The ideology is identified with that of the organizations of RSS, Manuvadi and Samanti forces and capitalists’ elements and there is no sane voice or opposition to question. This will lead to dictatorship and Varna system of domination, exploitation undermining the interests of SC/ST and poor people. All the top posts of President, Vice-President, Prime Minister and cabinet ministers belonging to particular school of thought, and where there is no powerful opposition one can easily draw inference as to what is going to be the fate of this country.

During the past five years, BJP has gone for collective looting of the country and various complaints against BJP leaders and their kith and kin had not been addressed or enquired into.

They have enriched and strengthened financially individually and collectively. Nobody has questioned as to how much foreign election donations/ bonds have come to BJP as well as other parties and what was the mode of payments how it has been utilized. BJP in power for last five years have diluted laws in its favor and where and how it has been used and where it has been expended. There is hardly any control and transparency on election donation.

It is therefore a matter of great concern for all the genuine liberals, democrats, socialists to unite and work towards saving the country from slipping into the hands of the people who are spearheaded by the ideologies and principles embedded deeply in the Manuvads, Varna and the Manusmriti. If not prevented then the country will definitely engulf itself in a conflict between the Upper and lower Castes wherein the former will emerge victorious and great exploiters.

There are 3% Manuvadi forces in all, who divide Indians through religion, communal and caste based politics. This is the same as “Divide and Rule”, policy of the British Empire. Finally they are successful to make and form the Government. There is fight between upper caste and lower caste Hindu but minorities are dragged into election to polarize and divide.