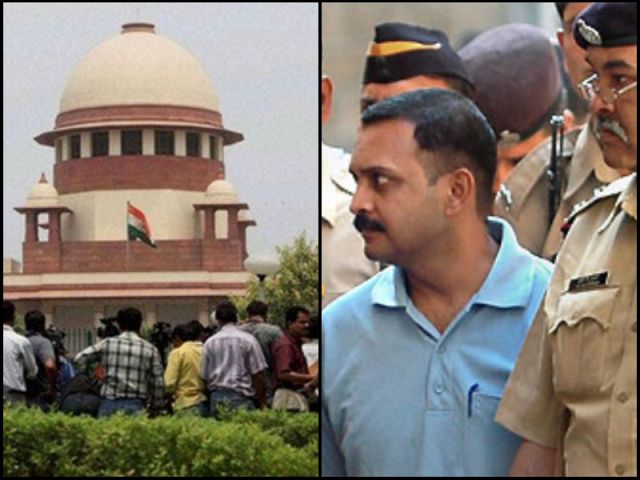 As the matter was called, a bench comprising Justice Abhay Manohar Sapre and Justice Uday Umesh Lalit directed for the listing of the matter before another bench as Justice Lalit recused himself.

Blaming the then UPA government for his implication in an alleged terror plot and eight-year-long incarceration for “personal political gains”, the petitioner contended that as a consequence a “source network developed meticulously by him and other officers of the Indian Army was demolished”.

Purohit was granted bail by the Supreme Court on August 12, 2017.

He is the main accused in the Malegaon blast, which killed six persons in the Muslim-dominated powerloom town in Nashik district on September 29, 2008.

Purohit’s plea to seek a judicial probe into his alleged abduction and torture is based on revelation by former Home Ministry Joint Secretary R.V.S. Mani, in which he is said to have indicated that Purohit was “framed by some factions in the previous government for political reasons, including introducing a face of terror under the guise of ‘saffron terror’.”

Mani’s revelation, Purohit said, had shocked him as he had “finally understood his role, of being used as a pawn, in the larger scheme of political spectrum by selfish political interests.”

Mani, according to Purohit, had given interview to media houses and even written a book ‘The Hindu Terror — Insider Account of Ministry of Home Affairs 2006-2010’.

“In these circumstances, the perpetrators and schemers of such sinister modus operandi, compromising national security, are required to be identified and made accountable,” the petitioner said.

He pointed out that there was “complete subversion of the criminal justice system by the state itself, and there is credible reason to fear that a citizen of this country, no less than an officer of the Indian Army, can be abducted, brutally tortured, labelled a terrorist and put away for nine years without a trial.”

SC asks CBI, Gujarat why they want activist Teesta Setalvad, her husband back in jail