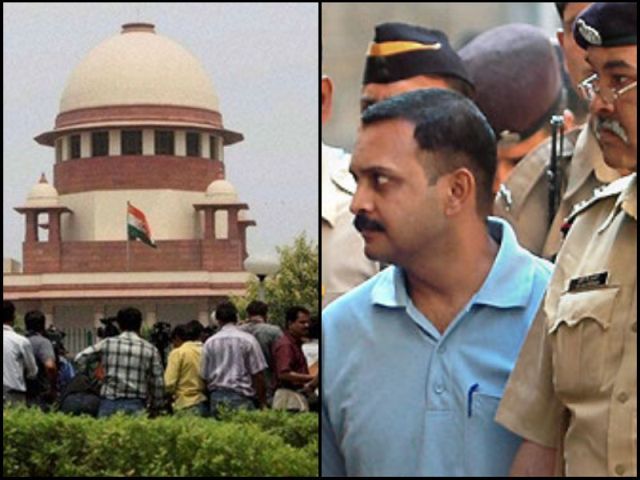 New Delhi : The Supreme Court on Tuesday rejected the plea by Malegaon bomb blast case accused Lt Col Prasad Shrikant Purohit for a judicial probe into his alleged abduction and torture by investigating agencies prior to his implication in the case.

“Why should we interfere at this stage? It will have some impact on the ongoing trial”, the bench of Justice Ranjan Gogoi, Justice Navin Sinha and Justice K.M. Joseph said.

Senior counsel Harish Salve represented Purohit and urged the court to let the National Investigation Agency (NIA) look into it.

Urging the court to grant them the liberty to raise the issue before the trial court, Salve said the dismissal of the plea would be viewed differently.

The court permitted Lt. Col. Purohit to raise the issue before the trial court.

Purohit is facing trial in Malegaon blast case and was granted bail by the Supreme Court on August 12, 2017.

Purohit is the main accused in the Malegaon blast, which killed six persons in the Muslim-dominated powerloom town in Nashik district on September 29, 2008.

Purohit had based his plea for a judicial probe into his alleged abduction and torture on revelation by former Home Ministry Joint Secretary R.V.S. Mani in which he is said to have indicated that Purohit was “framed by some factions in the previous government in the name of ‘saffron terror’.”

Mani’s revelation, Purohit said, had shocked him as he had “finally understood his role, of being used as a pawn, in the larger scheme of political spectrum by selfish political interests.”

Mani, according to Purohit, had given interview to media houses and even written a book ‘The Hindu Terror — Insider Account of Ministry of Home Affairs 2006-2010’.

“In these circumstances, the perpetrators and schemers of such sinister modus operandi, compromising national security, are required to be identified and made accountable,” the petitioner had said in his plea.

He had pointed out that there was “complete subversion of the criminal justice system by the state itself, and there is credible reason to fear that a citizen of this country, no less than an officer of the Indian Army, can be abducted, brutally tortured, labelled a terrorist and put away for nine years without a trial.”