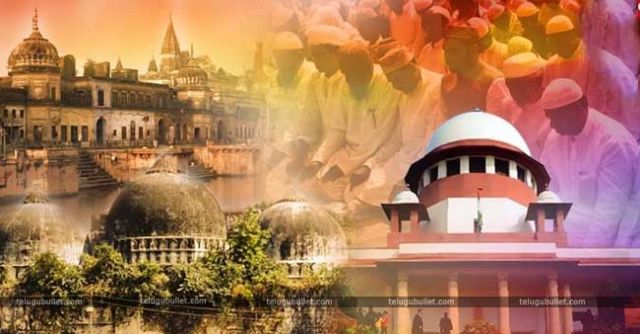 New Delhi : By a majority 2-1 judgement that could hasten the process of hearing in the vexed Ramjanambhoomi-Babri Masjid dispute, the Supreme Court on Thursday rejected a plea for referring the issue to a larger Constitution Bench and referred the case to a three-judge bench to be set up that will begin hearing from October 29.

“We are of the considered opinion that no case has been made out to refer the Constitution Bench judgment of this court in Ismail Faruqui case for reconsideration,” said Justice Ashok Bhushan, reading the judgement on behalf of himself and Chief Justice Dipak Misra, who headed Thursday’s three-judge bench.

The bench was giving its verdict on petitions by some Muslims who had pleaded that the 2010 judgement of the Allahabad High Court splitting the title dispute into three parts be heard by a Constitution Bench as it involved reconsideration of a 1994 ruling by a five-judge bench of the apex court which had held that mosque was not an essential part of Islam to offer namaz.

Thursday’s order assumes significance in view of the fact that a possible early judgement in the case could have implications in the 2019 Lok Sabha elections as the Ayodhya dispute has been a major electoral issue in the last over 30 years.

The petitioners had contended that while deciding the title suit in 2010, the Lucknow bench of the Allahabad High Court had referred to the observations made in the 1994 judgement by the five-judge bench.

However, in a dissenting ruling, Justice Abdul Nazeer said the judgement in the 1994 Ismail Faruqui case needed reconsideration and the matter should be referred to a larger Constitution bench.

The majority judgement on Thursday held that a newly constituted bench will commence hearing from October 29 on a batch of petitions filed by both the sides — Hindu and Muslim stakeholders — challenging the 2010 judgement trifurcating the disputed site into three parts for Ram Lalla, Nirmohi Akhara and the original Muslim litigant.

“The issues, which have arisen in these appeals (Ramjanambhoomi-Babri Masjid) are no doubt important issues, which have to be heard and decided in these appeals. Normally appeals arising out of suits are placed before a bench of two judges but looking to the importance of the matter, the present appeals have already been placed before three-judge bench.

“For the aforesaid reasons, we do not agree with the submission of petitioner that these appeals be referred to Constitution Bench of five judges to reconsider the constitution bench judgment in Ismail Faruqui’s case,” Justice Bhushan said in the verdict.

In his minority judgement, Justice Nazeer said “questionable” observations in the Ismail Faruqui ruling were arrived at without undertaking a comprehensive examination and they had permeated the judgement in the main Ayodhya title suit.

He said a Constitution Bench must decide what constitutes essential practices of a religion and thereafter the Ayodhya land dispute should be heard.

Justice Nazeer also said that whether mosque was an essential part of Islam for offering namaz was to be decided considering the religious beliefs and requires detailed consideration.

“It is clear from the aforesaid decisions that the question as to whether a particular religious practice is an essential or integral part of the religion is a question which is to be considered by considering the doctrine, tenets and beliefs of the religion. It is also clear that the examination of what constitutes an essential practice requires detailed examination as reflected in the aforesaid judgments,” Justice Nazeer said.

He also said that the question of the 1994 Ismail Farooqi judgement needed to be referred to a larger Constitution Bench.