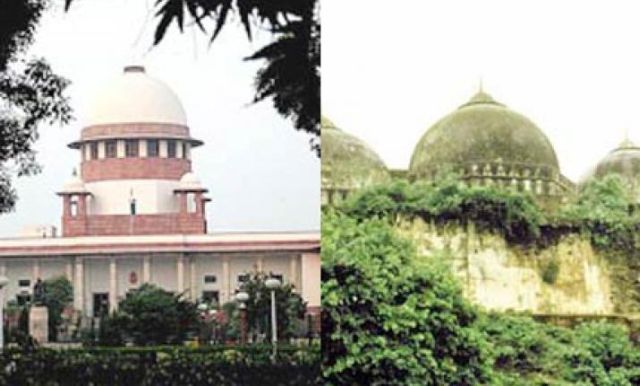 New Delhi : The Supreme Court on Friday reserved its order on a plea by Muslim litigants seeking that the hearing on the batch of petitions challenging the 2010 Allahabad High Court verdict directing the splitting of the disputed site at Ayodhya be heard by a larger bench.

The bench of Chief Justice Dipak Misra, Justice Ashok Bhushan and Justice S. Abdul Nazeer reserved the verdict on the conclusion of arguments by senior counsel Rajeev Dhavan seeking the reconsideration of the part of 1994 top court judgment which said that a mosque was not essential to Islam for offering Namaz.

Dhavan appeared for the lead petitioner M. Siddiqui represented by his legal heir.

The Lucknow bench of the Allahabad High Court by its September 30, 2010 verdict had ordered that the land around the disputed site would be divided into three parts — one for deity (Ramlala Virajmaan), another for Nirmohi Akhara — a Hindu sect and an original litigant in the case and third for the Muslims.

At the outset of the hearing in the apex court on Friday, the court witnessed commotion as some lawyers objected to Dhavan’s use of term Hindu Taliban and comparing the razing of Babri Mosque on December 6, 1992 to that of destruction of Buddha statues in Afghanistan’s Bamiyan by the Taliban.

Refusing to budge from his description of Hindu Taliban, Dhavan said that he stood by every word and destruction of Babri Mosque on December 6, 1992 was an act of terrorism.

As senior counsel C.S. Vaidyanathan appearing for one the Hindu litigants described arguments as “mockery”, Dhavan said: “It is an argument based on the destruction of the mosque.”

Dhavan said that the former Chief Justice, the late J.S.Verma had said that Hindus must wear the cross for the destruction of the Babri Mosque.

At this, reminding Dhavan that it was incumbent upon senior lawyers to maintain “decorum” in the court, the Chief Justice described as “inappropriate” the words used by the senior lawyer.

Taking exception to the “inappropriate adjectives” used by Dhavan, he said that “adjectives” that are used in the course of the arguments should be the ones that have the acceptance of the court.

“You may think what you may, but the court thinks it was completely inappropriate,” Chief Justice Misra said as Dhavan insisted that he did not think that the description of Hindu Taliban was inappropriate.

Dhavan said that he could differ with the bench and that will not amount to contempt.

The Chief Justice meanwhile one of the lawyers to leave the court room after he said that “thousands of temple were destroyed and you still call us Hindu Taliban”.

Things came to such a pass, that a lawyer complained that court has become a sort of parliament.