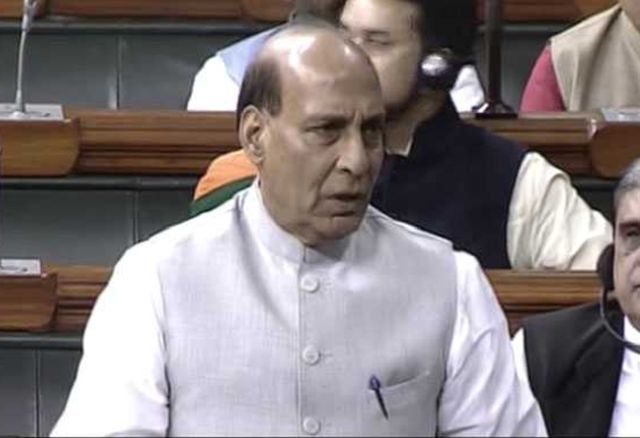 New Delhi : Home Minister Rajnath Singh on Thursday said a bill to amend the SC/ST Atrocities Prevention Act, approved by the Cabinet on Wednesday, will be introduced in Parliament in the ongoing session for consideration and passage.

The Leader of Congress in the Lok Sabha, Mallikarjun Kharge, asked why the ordinance route was not adopted in this “important” case when the government brought six ordinances in several other bills.

“I am surprised… I don’t know why the members are raising this issue now. I think they are aware and they have the knowledge that the Union Cabinet under the chairmanship of Prime Minister Narendra Modi approved The Scheduled Castes and the Scheduled Tribes (Prevention of Atrocities) Amendment Bill,” Rajnath Singh said in the Lok Sabha during Zero Hour.

He said the country knew that the Supreme Court had diluted the SC/ST Act through its ruling that a preliminary enquiry was required to arrest any person even under the SC/ST Act meant for preventing atrocities against those covered under the Act.

“The Prime Minister had said if there is any dilution in the Act, we will bring a bill. And there is no if and but in it, he (Modi) had promised. He also said the government will not allow dilution of SC/ST Act,” Singh said.

“We will introduce the Bill in this session of Parliament to make it a law.”

Kharge, who raised the issue during Zero Hour in Lok Sabha, said: “Four months have passed but no action has been taken by the government to nullify the Supreme Court order, which was a dilution of the SC/ST Act. They brought six ordinances, but why no ordinance in such an important matter.”

“Atrocities against SC/ST are increasing in the country. Bring a bill tomorrow, and we will pass,” said Kharge.

“The government has not done anything to nullify the Supreme Court order. You bring ordinances for every small issue, why didn’t you bring an ordinance for this issue,” he said.

The Home Minister’s remarks come a day after the Union Cabinet decided to restore a provision of the SC/ST Act allowing the arrest of accused persons without a preliminary enquiry or prior approval that was struck down by the Supreme Court.

The preamble of the amendment says that the decision to arrest or not to arrest cannot be taken away from the investigating officer, a power given under the Criminal Procedure Code in which there is no provision for a preliminary enquiry.

Under the new provision, no preliminary enquiry will be required for registering FIRs against the accused and arrest of persons accused under the SC/ST Act and this will not require any approval.

The provision of anticipatory bail shall not be available to the accused notwithstanding any court judgment.