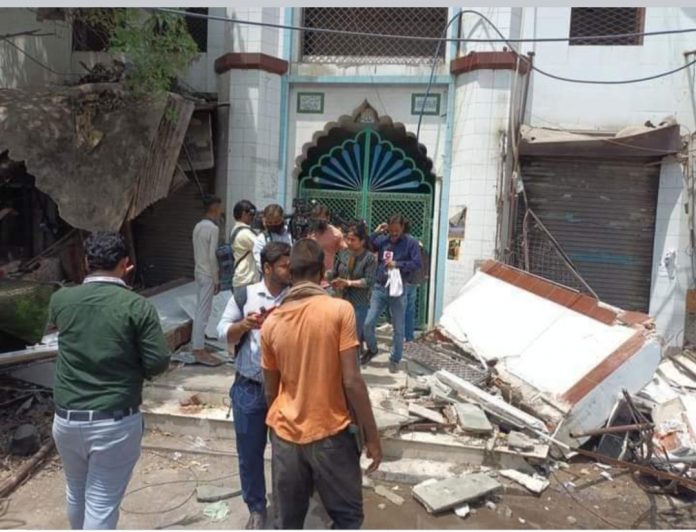 NEW DELHI : The Supreme Court on Thursday extended the status quo order in connection with the demolition drive carried out by the North Delhi Municipal Corporation (NDMC) in Jahangirpuri until further orders.

A bench comprising Justices L. Nageswara Rao and B.R. Gavai said it will take a serious view of the demolition, which was carried out by the authorities, after the top court’s order on Wednesday was communicated to the NDMC Mayor.

The bench said it will take up this matter later.

The top court issued a notice on the petitions filed by Jamiat Ulama-I-Hind and others, against the demolition drive carried out in Jahangirpuri.

The top court has scheduled the matter for further hearing after two weeks.

Jamiat Ulama-i-Hind has also filed another petition against demolition in other parts of the country – Gujarat, Madhya Pradesh, and Uttar Pradesh.

Senior advocate Dushyant Dave, representing the Jamiat Ulama-I-Hind in the matter against Jahangirpuri demolition drive, said the NDMC Mayor told the media that the top court order will be complied with at 11 a.m., but the demolition drive went on.

During the hearing, the top court observed that it cannot stop demolition in the entire country, after a senior counsel contended that the court should stay demolition until further orders.

Senior advocate Kapil Sibal, representing Jamiat Ulama-i-Hind, submitted that encroachments is a serious problem all over India but associating Muslim community with encroachment is not correct.

He added that such instances are happening in other states also, and when processions are carried out and frictions occur, homes of only one community are bulldozed.

Solicitor General Tushar Mehta submitted that in Jahangirpuri, the demolition drive to remove the encroachments on footpath began on January 19, it was carried out in February, March, and on April 19, it was the fifth date of the drive.

Mehta said he can bring on record instances when notice is not required, and also illegal structures were given the notice.

He added that the people moved the Delhi High Court last year and it had ordered demolition.

Mehta added that individuals affected by the demolition have not moved the court, but an organisation has moved instead.

After a detailed hearing in the matter, the top court said it wants affidavits from the petitioners on the notices if served, and counter affidavits and till then status quo order will continue till further orders.

On Wednesday, a bench headed by Chief Justice N.V. Ramana had ordered status quo on the demolition drive, after Dave mentioned the matter before him. — IANS

Protest on the 30th anniversary Babri Masjid demolition, demand for justice to mosque will continue